Home Archives Profile Subscribe Links Rankings
Maybe next time he'll think before he cheats...
Think about the place where you live...

I am fully convinced that Bugs Bunny is a propaganda stunt by some unknown organization established with the express intent of saving bunnies from what would otherwise be a bloody demise.

And, I must admit, I fell for it hook, line, and sinker.

I was always under the impression that bunnies were a good thing. Cute little "hippity hops," as Katie would call them. A sign that spring was here. They really do nothing other than hop around, eat grass, and fornicate. Can life possibly be any more pure than that?

Lately, though, Katie and I have uncovered the nefarious truth about these little minions of evil. Before we left for Vegas, we planted some hostas on the berm in our backyard. We had been warned by our next door neighbor that hostas are the food of choice for rabbits. She should know, she has a berm loaded with them as well. Her's looked great and she shared her secret... Liquid Fence. This fox-urine smelling spray is supposed to scare the bunnies away.

We went to Home Depot to pick some up. The sales clerk revealed that they didn't have any but they have "an equivalent that's just as good." We bought it and sprayed some just before we left. Then we gave the bottle to our neighbor and asked if she could spray it while we were gone. She agreed. 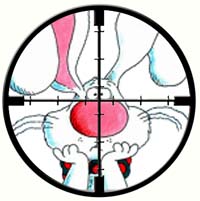 When we got home, a vast majority of our hostas were eaten alive. Our neighbor said she used our stuff but that she didn't think it was the same stuff as it didn't smell nearly bad enough. It does smell horrifically bad. So we finally found the real stuff this weekend at another hardware store, but not before it was too late. The rabbits had eaten through nearly all that was left of our hostas.

Bugs, Thumper, et al, there is nothing you can now do to convince us that bunnies are good or pure or innocent. You are rodents with big front teeth. And you must die. If I happen across one of you little bastages, I will spray you directly with this Liquid Fence stuff just so that you will never be welcome in your own home. The second your pack catches a whiff of you, they will run... or hop... or whatever you do when you try to escape from a predator.

Make no bones about it, your bouncy little ass is mine.

Totally Unrelated Aside (TUA): If you have not yet seen Pan's Labyrinth, check it out immediately. Fantastic beautiful and well told story of a little girl in pro-Franco Spain in 1944 who escapes the horror of her surroundings (her mother just married a sadistic army commander) by fulfilling her "destiny" as a princess who is to lead a kingdom of fairies back into power. I've never seen a movie quite as rich in visuals as this one. This movie alone is reason enough to own an HDTV.

Hostas? What the hell is that, another word for ganja? You shouldn't be planting that stuff outside, anyway, dude. Now you have tons of rabbits high out of their minds, jonesing for Doritos.

I could have told you that rabbits are evil. I decided this at age ten when my friend thought that it would be fun to have the pet bunny at our daycare hop around on the table while we worked on homework. Everything was good for about 15 minutes or so, when suddenly the psychotic bunny decided to hop over and to try to take a chunk out of my hand. I have not like the creatures since.

And Pan's Labyrinth is on my summer viewing list already.

I saw Pan's Labrynth in the theater. SO great!! I had The Boyfriend with me, though, and at the end he yelled "WHAT?! THAT DOESN'T MAKE ANY SENSE!" He had no idea the labrynth wasn't real.

It made me want to marry him even more. LMAO!

Be warned that the nefarious bunnies also like vegetables. (No wonder the farmer was always so furious with Peter Rabbit!) I'll have to try that liquid fence stuff.

Hmmm, we have all kinds of hostas around our tree in the front and da bunniz leave em alone. I know we have bunnies too becase we have bunny turds everywhere. Maybe they are eating other peoples hostas and just using our yard as their potty.

Hmm. We have bunnies and hostas in our backyard and they seem to co-exist in peace. Maybe because the bunnies seem to prefer our neighbours' roses...

Karl, that's all I have to do? Give them Doritos? Dang, wish I knew that before I invested in Liquid Fence.

Dagny, so why didn't you tell me they were evil??? You should post about that one.

Odie, for the most part, they've left our veggies alone. But keeping them in pots as opposed to ground planting probably helps with that one.

Jacquie, lucky you. You want my hosta-ravaging breed?

suze, they must be doing something to another plant and you're not noticing.

Lay a bunch of rabbit's feet key chains around your hostas...maybe the threat alone of purple and blue bunny feet with ball chain will get them shakin' in their hosta eatin' boots.

Mmm, but they taste so good pan-fried and crusted with pecans. Bunnies or rabits: Pets or meat? That's the decision to make. Seriously good eats. Maybe go all Great White Hunter on their furry little butts and discover a new taste treat in the process?

Thanks for the tip - my Dad has an allotment and the little 'Bunny Bastard's' (as he refers to them) are eating his veggies and he's tried everything!

Adorable woodland creatures tend to devour decorative foliage. Where I live, it's deer. Bambi loves tulips, among other things. My landlord would happily pick them off, so when he asks, "Did you see a deer in the yard this morning?" I say no.

Which is sorta honest. It's never just *a* deer. It's usually more like eight.

I loved Pan's Labyrinth, it was so good. Usually I forget films instandly, but it stayed in my mind weeks after I had seen it. However, it's one of those movies I don't know if I ever need to see again.

metalmom, can I send you all my bunnies, then?

Foo, hmmm, not a bad idea. And douse them in Liquid Fence to make it that much worse.

Bec, I hope it works for him.

Stacey, this Liquid Fence is designed for deer and rabbits. Might save you the sound of shotguns as a wake-up call.

Brandon, I think I'd watch it a few times more just to make sure I didn't miss any subtle nuances.

ARRRRGGGHHHHH - post internet shopping - they won't deliver to the UK!!!! Dammit! (Am goign back to my the UK is rubbish sulk)

For the Liquid Fence? Hmmm... I'll trade with you for a cool little thing that they only sell in the U.K. for 1st-gen iPod Shuffles.

Translation: I hate when companies do that.