Welcome one, welcome all to the kapgarized edition of the Carnival of the Mundane... 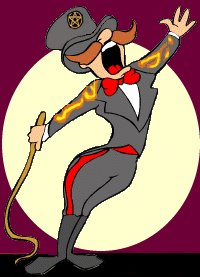 I gotta tell you all that I'm ashamed of you! We're coming up to week four of the (American) football season and we're 0-3! I expect more than this from you. Our GM has spent a lot of money to ensure that we bring the Lombardi trophy home... where it belongs... right here in our stadium for the fans who have supported you all these years to enjoy again.

And this is how you repay their loyalty?

I was called up to the GM's office last night and got a tongue lashing. I don't like being spoken to like that. That's why we're all here right now. We're going to figure out what it'll take to turn around this season before it's too late!

He's not afraid to cut us all loose at the end of the season. He's got the money to buy a whole new team and, if we keep up these losing ways, you know that stud college quarterback will be his first choice in the draft next year.

Do you really think that all of you, with the way we're playing now, will get a new job all that easily? Do you think other teams are going to care about you when you're languishing on the free agent list?

That's why we need to prove ourselves here and now. Show our mettle. Let people know how tough we can be!

Ali Eteraz... all that anger and resentment you hold for The Noble Quran? I want you to turn it around on the other team's defense. They were the ones responsible for the reprehensible work done to the citations. Now take that pent-up frustration and turn it into a force for good.

Leslie Carbone... what would you do if those guys actually touched your Bentley? Would you want them to mar the lustrous surface of such a fine automobile? I know I wouldn't. And that's what the other team is doing this instant. They're damaging it. And only YOU can stop them.

Lil Duck Duck... those guys in the helmets and shoulder pads lining up across from you? They're the future for your child. They represent your child all grown up and having moved well beyond the babytalk and youthful exuberance that you so cherish. Fight it before it's too late! You gotta fight for your right to enjoy your child's innocence!

Mad Kane... focus on the breathing. That's exactly right! Use that internal control to turn all your stress into a weapon to blow through the other team and hightail your way into the endzone! There is no better way to eliminate stress than through physical exertion. Turn that stress into a celebration!

Eliot... I want you to burn past the defensive backs leaving them as nothing more than a puddle of mushy hippocampus in the middle of the field! You have the speed, you just need to will yourself past them. I have full faith in you.

My Bubble Life... Think how disgusted you were that first time you tried coffee. The bitter, acidic taste in your mouth? You remember that? That's nothing compared to how horribly you'll feel if they win! Now that you've become addicted to the brew, I want you to run up the field like they're trying to take it away from you!

Mark... avast ye, matey! Ye must protect ye treasured booty. We have scavengers in our midst. If we're not careful, they'll make off with our pieces of eight! The scurvy scoundrels! We must defend our ship! We must protect our arses! We shall never raise the white flag!

Jon Swift... I know you wanted to deny terrorists a moral victory by just treating 9/11 like any other day, but I'll be damned if you're going to treat our opponents like any other team. This is a life-and-death situation here. If we don't win, we'll be hitting the classified ads come the end of the regular season!

CountryGoalie... you are our front line of protection against the opponent. I know you felt horrible as you witnessed the disappearance of those bantam eggs to an unknown predator. But once you figure out how to protect them, they survived and fluorished, didn't they? The same goes for our team! You protect us on the line and we will win! It's all in your hands! If need be, pull a "Rafter" on them. Fly around like a psychopath and throw them off their game!

Claire... [staring deep in your eyes, I draw a line with my right index finger across my throat; you nod your understanding] sometimes the most effective communication is nonverbal, isn't it?

Billy Mermit... one of the worst feelings in the world is knowing that you and your significant other just can't find the right bed mojo. Nothing will help. It gets frustrating, doesn't it? Now focus that frustration, work it down into a ball of anger and turn let it explode on the other team. You'll sleep better for it tonight, I promise you.

Kailani... I want you to harnass the manic energy of Lady, Tippy, Tiffany, Benji, and TJ and turn that into an unstoppable force driving up the field for a touchdown!

Tiff... have I told you the other team is sponsored by Yahoo Mail? 'nuff said.

Tracy Lynn... ah, a woman after my own heart! A true-blooded warrior waging battle against the tyranny that is the gas company. If only my entire offensive unit could be clones of you... we'd never lose a game!

Sparky Duck... maybe you're not a granola-loving tree hugger, but where you lack outdoors skills, you excel in street smarts and have a city-dweller's quickness of instinct. Use that to your advantage and this game will be ours for the taking!

Miriam... you're right. Guns don't kill people, but pissed-off grannies can positively slaughter someone when provoked enough. Where's your threshold?

Ellen... why can't you have the haircolor you want? Are you just going to sit back and take it? NO! Now go fight for your right to have your hair dyed whatever color you so desire.

Ferdinand... we all know the reason Bruce dresses that way year round is not so much because he is a terrorist but because he's one of those football fanboys who has his belly painted in his team's colors... our colors! If he wore anything more revealing, they would discover his body permanently dyed like our team mascot. It's loyalty! And our team needs fans that will remain loyal!

Marisa... if you show the same kind of patience on the field that you displayed when buying plane tickets online, I have no doubt you'll read the other team perfectly and know what play is coming even before they do!

Hyperion... it seems to me that you should have more motivation to want to win than anyone on this team. If you're that tired of moving from house to house and breaking that unspoken bond with your edifice, than why would you want to lose and risk being cut from the team and have to move again for yet another new job? No, you wouldn't want to, would you? So let's win this thing!

Sarakastic... don't you just hate it when people waste your time with meaningless banter and won't shut up? I will shut up now. But, I guarantee the other team is not going to be so respectful! Don't you hear the trash talking?

If some of these are a little "off," I apologize. I had a theme going in my head and making some of these entries work within that theme was, well, difficult. I tried my best. I hope you enjoyed it.

Where in the world is...

Sep 28
After rediscovering Google Earth due to that post about the naked sunbather, I've been playing with it a little bit. I forgot how much fun this program is. But what really strikes me is how odd things appear when you...
Next Post

Sep 30
I am a fan of Robert Downey Jr. Always have been a fan. He always plays quirky, flawed characters that you just can't help but love. And this despite how screwed up his real life tends to be. I loved...

Can we pour the Gatorade on your head now, Coach?

Tracy, tiff, and Kailani, thanks!

Neil, only if I can pull a Comcast ad and pause the live TV, move out of the way, and put you in my place as the Gatorade splashes down. Of course, this may only be a Chicago-area ad. I'm not sure if they created variants for their other markets. Our version starred Bears head coach Lovie Smith.

Homey so confused; maybe it is the anesthesia wearing off, LOL.

So are we going to run a 5-2 defense, or do you just want to stick with the nickels and have the line try to break through on the own with stunts from the extra cornerback??
:)
Thanks for hosting, I cant wait to sit down and read tomorrow

You started off with a football reference and my eyes glazed over. Sorry.

Hilly, possibly. Confused by the football references or the entire idea of the Carnival?

Dagny, c'mon! It's worth it. Promise!

An excellent carnival, thanks for playing!

Hey, no problem. Thanks to you, too.