God put a smile upon your face... 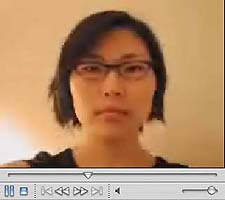 This has got to be one of the coolest things I have ever seen in terms of independent video production.

Basically, an artist named Ahree Lee began taking a digicam self portrait of herself on November 1, 2001. This trend continued every single day. I think it's still going on as she calls this film a work in progress.

Well, she has now taken each shot and spliced it together into a film showing her evolution over what amounts to nearly five years. Each photo is a single frame within the video and, while it may sound a bit weird, the end result is fantastic.

And the music on the video was written by her husband. It, too, is really good.

Yes, this video is also available on YouTube, but if you watch it on AtomFilms, she actually receives a royalty for it. Either way, it's free to you.

Oh, and I've got a meme for you in the extended post, courtesy of SJ.

Are you man enough...

Aug 11
Is it wrong to occasionally feel as thought you are not permitted, per se, to sing certain songs? At least, not out loud? I'm not trying to imply that I'm better than a particular song or artist. Nor am I...
Next Post

Aug 13
I'm not a big fan of horror movies. Well, not movies that adhere to the modern bastardization of the genre anyway. I have not, nor do I want to see Saw (ha!), the new Texas Chainsaw Massacre, Hostel, etc. Okay,...

Woah, that video is neat! The music is a bit freaky though!

Dave, totally understandable why it's one of your faves. It was a damn fine book. I'm glad I finally took your recommendation and read it.

Kilax, isn't it cool? I can't wait to see how it progresses over the years.

Bre, I think Last Chance may be one of the first I do wind up reading multiple times. Marley and Me made me tear up and made Katie sob hysterically.

Very cool video. Thanks for the link.

i like the book meme! and i am so going to check out that woman's site. thanks for the linkage. :)

Loved the video. I cannot believe that you hae never read a book more than once. That's why I buy books. So I can read them again and again. And thank you for listing "Dianetics" as a book that should not have been written.

Interesting how her expression remains so constant in each photo. I loved the music. It sounds perfect for a mystery-type film. Did you notice the day she had a blonde wig on? :)

The video:
- had me thinking of PEter Gabriel's Sledgehammer video
- I caught that huge blonde wig too - too funny!
- overall - great vid, thanx for sharing!

The Book Meme
i am definitely stealing this one. But I too can't believe you don't re-read books: there are some that are just too good to be read just once. Or sometimes, too subtle. Or depending on when in your life you read a certain book, different things resonate with you at different readings, y'know?

That video is crazy...I wonder if I could do that with how I look when I first get out of bed until ready to leave the house? *snort* Talk about transformation ;)

I used to LOVE the "choose your own adventure" series of books...I think it totally developed my creativity and penchant for mystery.

That is one trippy video. Can we say "long term project?"

It is pretty cool though. Chronicling your life takes on a whole new meaning.

Cool video. Thanks for sharing that link.

And cool meme...short enough I may just go knock it out.

Karl, that's one of my favorite books of all time. Hence why I was so stoked about meeting him and having him sign my copy.

Dagny and lynne, it's not that I don't want to reread certain books. It's just that given the number of books I still want to read before I die, I feel like I cannot justify the time spent rereading one. Not yet at least. Believe me when I say there are plenty I would reread, they were that good.

Nicole, yep, caught the blonde wig. Tripped me out a bit.

Hilly, that would be a great way to document a weight-loss project, too.

Claire, so not like one of my huge drawn-out memes, right?

I reread Terry Pratchett, because he just gets funnier with each reading. I recently read A Dirty Job, Christopher Moore's latest, it's very good. I've been a fan since Practical Demonkeeping.
The Devil In White City is a really good book. I bought it for the serial killer part, but wound up being fascinated by the fair part in equal measure.

And that video is mesmerizing. Very cool.

I love anything by Christopher Moore, but especially Lamb. So funny, even my minister father enjoyed it :)

Tracy, I read A Dirty Job too and liked it. Of course, it's because I love Christopher Moore and had him sign my copy of it when he was in town a few months ago. Thanks for the info on Devil.

Suze, many religious people I know have read it and love it. They think it has a very good message about inclusion. I'd love to hear it covered in a sermon somewhere.

Nice book survey. I'd like to borrow it, as soon as I have time to give the questions some thought.

Sereena, I will have to thank RW. Yeah, it is a strange video, but still very cool both in terms of the result and the level of dedication. How easy it would have been to just say "screw it, I'm tired of this." Go ahead and steal the meme. That's what they are there for.