To review, or not to review. . .
Hey, wish me some luck. I'm submitting revised versions of my blog-based reviews of The Omen and Superman Returns to a local newspaper for consideration as a contributing movie reviewer.

And if I get the role... step one of my plan for total Kapgarization of the mass media will be complete! Muahahahahaha!! 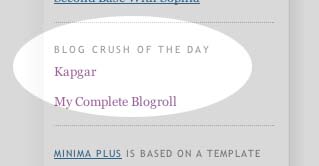 It was only a fluke that I happened to find it, too. I missed it when I was reading and commenting on his daily post. I only saw it when I was looking at blogs that were linking to mine via Technorati.

If he sticks to the "daily" aspect of this feature, I will likely be passed over today in favor of a younger and newer me. But I have captured it for the sake of warming my heart for years to come!

I'm the Blog Crush of the Day of the Citizen of the Month. How cool is that?

Yo ho, yo ho, a pirate's life for. . .
If any of you are interested, you can read in the extended post about a debate I had with Dustin regarding the merits of ninja over pirates. I was in support of ninja and he supports pirates. I'm sure I'll be flamed for this by a few of you (Dave). But, hopefully, one or two of you prefer ninja... because they rock!

For the sake of clarification. I do like pirates. They are quite cool. Just not as cool as ninja. Our Ninja vs. Pirate debate began as a result of Dustin's Google Talk status message which read something about how his ninja-ness was all powerful or some such line of self-serving crap.

I also need to note that I went through the discussion and reordered a few comments here and there so they aligned with their particular responses. With the free-flow nature of IM chats, you must be careful because, by the time you respond to a comment, a person could have posted several completely un-related comments. So I'm trying to make everything flow in a logical manner.

Also, Dustin can't spell. Must be the uneducated pirate in him. So I'm covering up for his... er... deficiencies.

Dustin: How's the finger?
me: In pain.
Dustin: This is what happens to you athletic types.
me: Me? Athletic? HAHAHAHAHAHAHAHAHAHAHAHAHAHAHAHAHA. ha. I thought you wanted to be a pirate, not a ninja.
Dustin: Pirates can have ninja-esque skills. I think...
me: They're a bit more in your face, I would think.
Dustin: I didn't say they showcased them on a regular basis. Doesn't mean they don't possess them. Here's what I wanna know...
me: Uh oh. Here it comes...
Dustin:: Has there ever been a pirate-ninja...or a "Prinja" as I like to say.
me: No Prinjas... just Ninjates. Ninja must be the dominant feature in the equation.
Dustin: Clearly that is wrong.
me: Nope. Ninja survive.
Dustin: Ninjas by their own nature are secretive and evasive, therefore they would come second in the equation. If you are even googling this...
me: Ninja are secretive by choice. Their secrecy results in greater fear than that of pirates. With pirates, you know what you're getting... rape, pillage, plunder, blah, blah. We all know it. No biggie. Ninja? What do they do? You'll never know until it's too late. Pirates are so run of the mill. So unoriginal.
Dustin: Still, Prinjas sounds so much more bad ass than Ninjates.
me: Depends on the pronunciation. Ninjates as in "nin-JAYTS"... yes, I'd agree. But you can make it sound cooler like this... "nin-JAH-tees." Totally bad ass.
Dustin: No, sounds like you're advertising T-shirts. Hey, at least Pirates never got lumped in with Teenage Mutant Reptiles.
me: Wasn't my choice on TMNT. I will take Usagi Yojimbo, though. But he's more a samurai rabbit.
Dustin: Wasn't there a mutant frog involved somewhere in that story line?
me: May have been. I'm not particularly well versed in Turtleology.
Dustin: Prinjas is cooler. "Prihn-JUHS."
me: Not bad, but it cannot compare to nin-JAH-tees. Just rolls off the tongue.
Dustin: It rolls right into the toilet.
me: Only pirates roll into the toilet. And feel at home doing so.
Dustin: It's true, they aren't prissy like ninjas.
me: Not prissy, just refined. BTW, maybe my memory isn't what it used to be, but I can't quite recall hearing anyone in high school throw out the term "Butt Ninja" as an insult. Do you? Think there might be a reason for that one?
Dustin: Hey, it's not the Pirates' fault that roided out jocks who were insecure about their sexuality chose to attach their name to slanderous insults.
me: But it was done for them. They were called "butt pirates" for a reason. Must have something to do with those long weeks at sea with nary a wench in site. At least ninja were smart enough to stay on land where women were plentiful. I'm thinking the word "harbor" has a little more meaning to a pirate. As in "disease harbor." You think they used protection? Doubt it highly. Ninja, on the other hand, had built-in protection. Ever wonder why your dong looks like a flesh-colored ninja when wearing a condom? Ninja were the inspiration.
Dustin: What!!?! Built in my ass.
me: What about your ass? You trying to tell me something?
Dustin: My ass does not look like a pirate.
me: I didn't say it looked like one. I wouldn't know. Nor would I want to.
Dustin: Oh, I thought that's where you were going... =) Hmmmm.
me: Nah, you'd fall in love and I'd fall asleep. ;-)
Dustin: Ninjas inspired condoms. Ha! =)
me: Protection, baby. Gotta watch out for the guild. Ninja are so rare that you must take all precautions that you possibly can.
Dustin: Okay okay, so let's assume for the sake of argument that you're right... which isn't probable... but I can suspend my powers of reason. Do you think that there has ever been a "Ninjate"??
me: Not likely.
Dustin: Let us ask the Omniscent One.
me: I already gave you the answer.
Dustin: Your blasphemy against Google will only reserve you a spot in Techno-Hell.
me: Plllbbttttt! I thought you were going to Wikipedia. 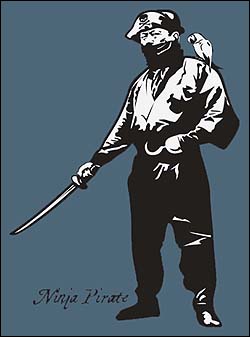 Dustin: Wikipedia, please. Okay, so before Web Sec. was able to shut me down, I found this... [image at right]
me: I think I shall start blogging about Ninjates just so there is finally a web-based resource on the topic.
Dustin: Not even half as cool as I was hoping, but it validates their existence.
me: Web Sec.?
Dustin: Web Security.
me: Gotcha.
Dustin: Also known as "the bane of my work existence."
me: The bane of everybody's existence.
Dustin: I dare you to start posting stuff about ninjates.
me: Maybe I'll just post our little debate and call it a day.
Dustin: Just so I can counter-post and have everyone agree that Prinja sounds cooler.
me: No chance.
Dustin: You roll those dice and see what happens.
me: Prinja doesn't even make sense. What happened to the "i" between the "P" and "r"? You forget about it? It should be Pirinja which sounds more like a fish than an ancient warrior.
Dustin: Clearly it doesn't matter since the idea is conveyed.
me: I dunno. If I were to leave out a little history, it could be conceived of as "Prick." Or "Priss." Do you really want "Priss" to be equated with your beloved pirates?
Dustin: erroneous, erroneous, erroneous on all counts.
me: Prove it. Find one and ask!
Dustin: This disscussion makes me hungry. I must adjourn for lunch.
me: Enjoy your booty.
Dustin: I always do.
me: Oh wait, that came out wrong.
Dustin: Give that middle finger a rest. Later.
me: Fine, I'll give you a virtual one. ;-) Adios.
Dustin: =)

Just for the record, I would like to point out that the creator of that image that Dustin found did have the common sense enough to put "Ninja" before "Pirate." What'd I tell ya, Dustin?

Jul 18
Ouch... quit it! Ouch... quit it! It hurts to type right now because I strained the hell out of my middle finger yesterday trying to save us from being aced against in volleyball. It was a fast serve, on a...
Next Post

Jul 20
Before I go into my post today, I wanted to take a second to hype up what I feel to be a very important post by one of my brothers in blogger arms, Mikey Miller of Who Do I Have...

Good to know that your injured finger isn't preventing you from getting work done!

I am afraid that I have to agree with Dustin on this one... Ninjates sounds like you are hawking a new brand of t-shirt.

Prinjas are a snack food.

good luck with getting the reviews published. that'd be awesome!

I'm with you on this one. Ninjas rule! Sadly, you and I are outnumbered in the monkey barn. :)

Allison, but when the alternative is Prinja? Seriously? And think about it, who's got the better kill percentage? Pirates? Hell no. Oh and my finger feels much better, thank you. Still tender, but good enough.

Dagny, I first read that comment from you an hour ago and I'm still laughing! No one can eat just one...

On second thought, that should be "once you pop, you can't stop," shouldn't it?

Sizzle, thanks. I hope it works out, too.

Dragon, I'll get your back on this one.

How about Nijates. Sounds like idiots slurred together with a bad accent!

Maybe I should amend the pronunciation to nin-jah-TAY so it's more inline with the proper pronunciation "karate" which is "kah-rah-TAY." Then it works even better. Correct me if I'm wrong on that one. Either way, it still beats Pringles... er... Prinja.

Dustin: "Hey, at least Pirates never got lumped in with Teenage Mutant Reptiles."

What the fuck is wrong with the Ninja Turtles?

Are you fucking serious?!? They'd own a prinja or a ninjate!

and by the way there were two frogs that the turtles had dealings with...

Johnny, I had a feeling about the frogs. Just wasn't sure. I figured you'd chime in with the appropriate information. Nothing wrong with the Turtles. Just not the most appropriate specimen of ninja to refer to in a ninja vs pirate debate.

I was all nostalgic feeling on hoping you get the reviewing gig and being the Crush of the Day and then I got to the comments and am ready to go get a tissue to wipe. away. the tears.

Stop. Stop. Y'all are killing me. I want to see a Dave-Toon of this.

Why is it that everything now makes me crave a Dave-Toon?

I wouldn't flame you... I like ninjas and pirates equally!

You are my blog crush everyday sweety.

And regarding the ninja vs pirate debate.... boys will always be boys. Why can't we just get along?

Dave, I must've missed that one before. I always thought you were just into pirates. Cool! You are one well-rounded swashbuckling ninjitsu expert.

Jacquie, woo hoo!! If we all got along, this world would be kinda boring. Argue on the little things, make peace on the bigger issues.

Will you get to see movies for free? Then it is sooo worth it!

Yep! You betcha. I wonder if they'd spring for Katie, too.