Allow me to recap some of the clues I gave each day before I tell you who I was Lost Blogging as.

Just so you don't tune out on this post, the six winners (yes... six! Pauly upped it on us) are listed at the end of this post. Woo hoo! 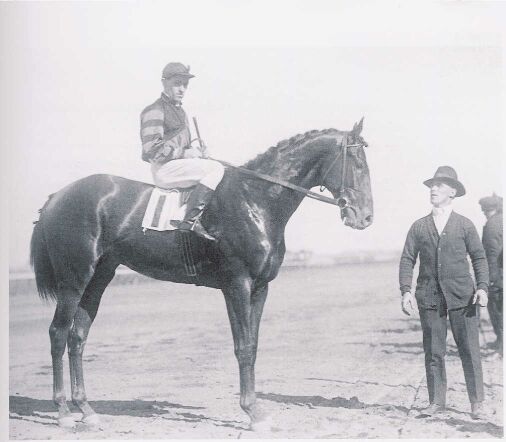 Yes, I would be the great racehorse, Man O' War!

Shocked? Dismayed? Ah, I even said in the last e-mail about the contest that you could be an animal if you could come up with one distinguishable enough that it could be guessed.

And nearly a dozen of you did guess me.

The big kudos go to SJ and Neil, though. They got me on Day 1. Scared the bejeebus out of me that someone guessed me that quickly. I was afraid it was all downhill from there.

Now, let's give my clues a closer analysis...

Making sense now? I hope so.

Hope you all enjoyed taking part in this Grassroots Blogger Book Marketing Campaign. I know I had a blast.

But, now it's time for business as usual at kapgar.com.

The Winners' Circle:
C'mon! Would you expect less from a guy who spent a week blogging as a horse?

Congrats to all of you who participated! You did a great job and all deserve recognition.

A few words from Paul...

This was OBVIOUSLY tough.  Everyone's were well-written, creative, and ingenious but I had to pick six so I picked these based on how "real" they felt to me or how authentic the voices sounded. And humor, well, humor is always good.

Congrats to these people and thanks again.

For those of you that Pauly picked, please e-mail me your full name and mailing address. I will be forwarding these to Paul so he can send you your prize booty!

In no particular order (I think):

Acceptance speeches can be posted in the comments to this thread. Heh.

Congrats to all, you lucky stiffs!

It's the next best thing to be free as a bird...

People are strange when you're a stranger...

Apr 16
I was tagged with this meme by Chase who was, in turn, tagged by Dawn at WriteWingBlog. Rules: Write a few weird/strange/quirky things about yourself, the total number is up to you. Post it in both my comments here and...

I laughed SO hard when I realized you were blogging as a horse (especially after the email in which you mentioned that "someone" had asked Paul about that). Positively brilliant.

I had a tremendous amount of fun with the Grassroots Blogger Book Marketing Campaign (even though I spent obscene amounts of time writing those posts).

Everyone's writing was so amazing that I also spent hours every night trying to get to each and every participant before I fell asleep. (I still have some to catch up on!) Like I said before, I think that the campaign brought out the best writer in many of us.

Like I said yesterday, I wasn't even thinking along animal lines. Of course, my brain was frazzled, anyway, so I doubt it would have mattered if your character had been human. Very well done, Kevin.

Wow, I'm so pleasantly surprised by being in the "Winner's Circle." Like Rabbit, I spent far too much time on each day's post. I tried hard to be historically true but I tried even harder to be funny. I thought that was keeping in the spirit of Paul's book. And who am I kidding, I don't think I could write straight prose to save my life. There has to be humor in there somewhere.

I thought that everyone did an amazing job this week. All of you showed incredible writing with unique voices and some wry wit. I think I guess maybe 5 out of the 40-odd blogs correctly, which shows just how poor I did in History class.

Best of all, I got to meet some great people and discover some cool blogs, so thanks for that. I look forward to staying in touch with you and adding to my daily blog readings.

Thanks to Kevin for organizing this whole crazy thing. Great job, Kevin. And thank you, Paul, for taking so much time out of your schedule to read all of our blog entries. I know firsthand that it took a LOT of time.

Oh, I forgot my acceptance speech --

Thank you, of course, to Kevin for coming up with the GBBMC, to Paul for writing the incredible book that we couldn't wait to promote, to everyone that read my posts, and to that little girl who informed me that she wasn't drawing Batman's penis.

a horse! i was stumped. excellent job kevin!

yay for the winners and all those who participated. it was no easy feat.

As for my acceptance speech, I'm totally shocked! There were SUCH brilliant writings in the contest!! All I did was talk about feet and flying. Maybe Pauly has a thing for feet...hmmm.

Congrats to everyone! And thank you to everyone, too! I had such a great time doing this!

OMG Kevin a horse!!! Too kewl dude. My speech is... I am still in a state of SHOCK I won with writers like Rabbit and Dave and the others constestants. So I would like to thank Paul for picking me and for my two(RIIIIIIIP) one, one signed copy of his book!!!! May the schwartz be with all bloggers!!! Oh yeah, Paul should give YOU a signed copy for your efforts.(Hint Paul)

I really think everyone won this week. And for the others that were picked. An extra congrats!!!

Apgar will be well taken care of.

I did not get yours until the final entry. How SJ and Neil got it on the FIRST DAY just boggles my mind!

Thanks again Kevin for such a fantastic idea and a great time!

I don't know about Neil, but I had a definite advantage on Man O' War, having been a racing fan since childhood.

Kevin, you did an awesome job on this! Thanks so much for masterminding the project. And thanks to Paul for giving us his blessing.

This one and Chase's I got on the first day, but I think that's it. Well, Brandon's I got after reading the first entry, but I didn't read it on the first *day*, so I'm not sure that counts. And that one, Alex got after about 3 sentences. And then wouldn't shut up about how smart he was.

And hey--did anyone watch "Assume The Position With Mr. Wuhl" on HBO the other night? One of the "tidbits" of history on the show was that the term "upset" in sports comes from that very race in which Man O' War was defeated by the horse named "Upset."

A cool, refreshing fount of trivia, I am.

I knew you were a horse. Well not you...but blogging as a horse. lol Awesome choice and really excellently done! :)

And congratulations to the winners! I really enjoyed reading all your entries! You're such a clever group!

Seriously though, Congratulations to all the winners and to everyone who participated. It was really fun. I'm glad to have gotten to discover fellow Paul fans and a big thanks to you KEVIN for heading this up. It was a great idea! And congratulations to Paul. Looking forward to getting my unsigned copy (sigh again) in May!

Kevin, you're tricky and I love it!

Rabbit, oddly enough, it wasn't me that brought up the animal idea to Paul. It was Kilax. And, when she changed her mind about doing that, I jumped all over the idea. I hated my original Lost Blogger idea anyway.

Karl, glad you had a good time and congrats again. And, don't worry, I think we all feel completely deficient in terms of history right about now.

Mikey, never count yourself out. And this should prove you should never doubt yourself, either.

Chase, sometimes those exclamation points will get the better of you.

Dave, blew my mind, too. So what gave it away on the last day? And you're welcome.

SJ, glad you had fun. And I still can't believe that you got it that quickly. Dammit!

Groovebunny, thanks for clarifying. I had hoped you never thought of me intentionally as a horse. That would not be a good thing.

Jacquie, sorry. But, like Pauly said, it was a tough decision. Even I couldn't really predict who he'd pick. But you still did a damn nice job.

Sandra, more than happy to accomodate. ;-)

You really didn't have any clue about who I was? Damn. I figured you'd nail it.