Home Archives Profile Subscribe Links Rankings
Next milestone...
I wanna push you down, I will, I will...

Who ya gonna call?

I don't know what happened to me, but sometime between my teenage self and the me of 2006, I became a horror wuss.

As a teen, I reveled in my love of horror films and my ability to sit through them and not give a rat's patootie about what happens. I was rarely ever scared and, if I was, it was one of those thrillseeker sorts of scared. My heart lived for it. It needed the quick adrenaline surge provided by a good scarefest of a film.

Now, however, that does not seem to be the case. I don't like being scared by movies. I still get the same cardiothoracic kickstart that I did before, but the settling back down is terrible. I have to force myself to find a rhythmic breathing pattern. It's just not fun. 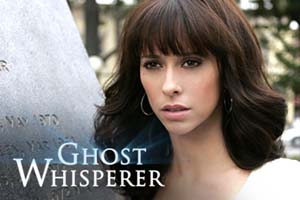 I mention this because, yesterday, I watched my first episode of ABC's Ghost Whisperer. The show stars Jennifer Love Hewitt as the owner of a small-town antique shop who, since childhood, has been capable of speaking with the dead. She can actually see and talk to what she calls "Earth-bound spirits" and help them let go of whatever is keeping them from leaving this ethereal plane (read: "Earth").

And, of course, I chose to start watching the series with an episode entitled "Demon Child." Brilliant choice, eh?

The episode centered around a businesswoman played by Lori Loughlin who just had a baby girl and is raising it with the help of a nanny. However, she's about to move out of her big, beautiful house to the city because, as we find out, she's haunted by the wickedly malevolent spirit of her dead first child.

And he's a little stinker.

He scares away all the new nannies that are hired to take care of the new baby through a series of seemingly inexplicable poltergeist-like activity including noises, toys that self propel, and power surges.

Hewitt's character, Melinda Gordon, who was actually only hired by Loughlin to sell off her rare and valuable antiques, begins to talk to the child to figure out how to help him.

But, before the episode gets to the "help" part, it runs through about 20 minutes of the kid terrorizing people, myself included. I was laying on my bed while Katie was at a bridal shower and I was wide eyed and fixated on the screen as I watched this kid mentally torment the hell out of anyone and everyone. And they did a really good job of it. I haven't jumped like this since watching "The Version You've Never Seen" of The Exorcist.

Once out of those 20 minutes, it really wasn't so terrible. Some cheesy acting as would be expected. Well, I expected it, at least, hence why I never bothered tuning in until this episode.

Has anyone else watched this show? Are they all jump-out-of-your-skin scarefests? Or was this the exception to the rule?

Oh, and Jen, lose the bangs, they look terrible.

I think the funnier part (over the bangs commentary) might have to be that Lori Loughlin and Jennifer Love Hewitt made your heart palpitate in a frightened sort of way. It kind of makes me want to hug you fondly. Although in all fairness, I am the most easily spooked person alive, so I'm sure I would have been jumpy too.

I with Sandra. I am easily spooked (and lucky me, have a BFF who loves loves loves horror flicks) but really the best part of this post is the commentary on J Lo Hewitt's hair. She DOES need to lose the bangs- good eye Kevin! Though the color? I might borrow that. ;)

I almost want to see this show, particulary because my housemate and I have a J Lo Hewitt contest going on. He even bought me her cd (gag) because he is mean and spiteful like that.

And, Kevin, I'm sorry, sugar...but I'm going to have to revoke your man card for saying "bangs" without making a sexual reference.

LOLOl great bangs line. My teenage friends and I saw the Texas Chainsaw Massacre and then went out for spaghetti. Today I can no longer watch it. The scene at the dinner table where the old man(in the wheelchair)starts sucking the blood out of the fingures wiggs me out.

A show with Jennifer Love Hewitt can't be that scary. I love horror movies though. I can watch a horror movie before going to bed at night and sleep like a baby. My own imagination is scarier than movies.

I grew up in a haunted house though so maybe I'm just a little thicker skinned when it comes to the Spawn of Satan. Hang in there Kevin. I'm sure Katie will keep you safe at night.

Sandra, it was pretty jump worthy. But it just kills me knowing that I was able to tolerate it before, but cannot anymore.

Sizz, "J Lo Hewitt"? I like that. Never heard it before. Care to explain this "J Lo Hewitt contest"?

C.M., but if I said what I really wanted to say, you might then call me something even worse and never return. Are you trying to tell me that a woman is giving me permission to incorporate tasteless and cheap sexual inn-your-endo on my site?

Sorry, I couldn't resist that one. It's an old joke amongst college buddies.

Mikey, I still have never seen The Texas Chainsaw Massacre. And I don't know if I can do it anymore. I may have missed my window of tolerance on that movie entirely.

Johnny, I rely on Katie to do just that. Of course, she can't have been watching with me as she's even worse about it than I am.

If you want a show of that genre, you should really watch its predecessor Medium. Patricia Arquette is awesome in it. Mondays, 10pm, NBC. Like JLH in Ghost Whisperer, PA's character is based on a real woman - in case you were missing that extra spook factor.

My mom watches Ghost Whisperer every week. And she CRIES every week too. Says it's an emotional release or something. BTW she told me that this week wasn't scary.

Claire, suspense isn't so bad. I dig on a well-written suspense flick. Unfortunately that "well-written" part limits my choices. I may have to give Medium a chance. Is the first season out on DVD yet? We are in the second season now, aren't we?

Rabbit, I've heard some argue that Jennifer Love Hewitt is the "scary" in scary movies.

I'm not sure if it's out, but you don't need to have watched it to understand season 2. Most eps are stand-alones. Definitely worth checking out.

I wonder if it will soon be available on iTunes. That would be pretty nice!