Home Archives Profile Subscribe Links Rankings
Is there a song I could sing...
I would die 4 u... 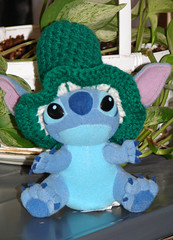 First, what better way to chime in the holiday than with an uber-celebratory Stitch?

So from me to all of you... a happy St. Patrick's Day! This is the first one that Katie and I have ever really been able to spend together without having work or classes interfere. And damn if we're not going out to enjoy it!

On the topic of luck, have you ever had an article of clothing that you considered lucky? Or maybe it's just that perfect piece of clothing?

I have a sweatshirt like that. It's a hoodie that's about six years old. I have no idea where I got it, but it's the first pullover hoodie that I ever owned. I don't think Katie bought it for me, per se, but I'm sure we bought it together, just don't ask me where. It's dark blue a band across the chest comprised of a yellow, white, and light blue stripes. This thing feels almost like fleece it's that soft.

Yet, recently, this sweatshirt almost wound up in a pile of clothes going to Goodwill.

It was intentional at the time. It had been a couple years since I'd worn the hoodie and I had gotten some kind of stain on the stripes that I couldn't seem to get out.

When Katie saw the hoodie on the pile, she looked at me with one of those "are you nuts?" sorts of looks.

"But I never wear it any more."

"So? You will. Trust me. You always return to the clothes you feel comfortable in."

Sure enough. I've worn it about three times in the last couple weeks. Yes, it was washed and we even got the stain out of it. I kick myself for nearly getting rid of it. What the hell was I thinking?

Now, I'm convinced I wouldn't be complete unless I'm buried in this hoodie.

We're off for some beers. Well, in about seven or so hours, that is.

Have a happy one!

I'm wearing my favorite article of clothing right now, actually! My hospital pants. Like you, I don't remember where I got them...or why, for that matter. But I LOVE THEM.

They're torn on the bottom and have food and paint stains, but I'd marry these pants if I could. It's a warm, comfortable, familiar relationship. I'd never Goodwill 'em. (Goodwill most likely wouldn't even take them)

I had a lucky shirt for a long time -- but my mom forced me to throw it out when holes began to appear in the cuffs...I still miss it sometimes. It was hideous, though, even when it wasn't holey.

i have a ringer tee-shirt with the statue of liberty on it. i got it about 11 years ago at a thrift store. it is so soft and worn and comfy. i don't think i can ever part with it.

but as for lucky clothing, it is more like lucky jewelry. i like to carry my dad's watch with me.

Totally OT, but I have to know... is that the talking Stitch?

Well, I mentionned my lucky shirt in my driving test story a while back. I haven't worn it in years- aside from putting it on to take a shot of it. But I don't think I could donate it. It's more because I love the shade of blue it is. Wearing and washing it more would eventually change the color.

I have t-shirts like that too, that I love, but once they're on the verge of falling apart, they get shelved out of the rotation. There's no clothing in particular at present I would wear for luck though.

I sometimes think I neglect my clothes if I haven't worn them in a while. Then I put them back in rotation and feel like I've done some good in the world.

I finally had to retire my hoodie because the elbows had worn completely through. It was a sad day indeed.

I LIVE in G.I. Guy's Army hoodie that I borrowed once when cold and never returned. It's in pretty bad shape already.

I live for hoodies. Put me in a hoodie and a pair of jeans and I'm happy camper. Drink one for me tonight. M

Chase, I've always wanted a pair of scrubs. I've thought about sneaking into a hospital and stealing some but then I realized the medical supply store a few miles from where I live might be a bit more on the up and up. Funny how Goodwill actually discriminates against some things that people try to donate. I tried to give them a very used, but still quite serviceable, ottoman. They said no. I still have it. C'est la vie.

Sandra, sometimes the holey ones are the best ones. Katie can't part with an old Nike sweatshirt of hers even though it's falling apart at the seams.

Sizzle, what's a "ringer" T? I can agree on lucky jewelry... well, make it more "lucky accessories." I've got a fave Zippo that I carry sometimes even though I don't smoke. Kinda Indiana Jones-ish.

Carly, nope, just a little four-inch stuffed Stitch. Got him at Wal-Mart when the movie first came out. Guess he's a rarity because he doesn't have his mouth open. Or so some collectors on Flickr have told me.

Claire, I've shelved many for the same reason. Got an old Van Halen shirt from their tour in '91 that I'm afraid to try and wear for fear it might turn to dust.

Dave, the elbows wore through? What were you doing in this thing?

Rabbit, Katie does that with me all the time. Her wardrobe has about 10% Kevin Gear (TM).

Mikey, I think I drank one for many people last night. Or so my head is telling me.

I was totally thinking of concert tees. Also anything irreplacable that I have an emotional/nostalgic connection to eventually gets shelved.

I would have to agree considering the number of concert T's I ruined from either overwashing or overwearing. VH is shelved pending a great throwback party or a reunion concert I can afford.