Home Archives Profile Subscribe Links Rankings
I'm just a girl in this world...
Is there a letter in your bag for me?

Buy me some peanuts and Cracker Jack (tm)...

Although the official date is still a week and a half away, I think it's safe to say spring is upon us.

The birds are chirping.

Grass is regaining its green coloration.

Northern Illinois spent most of the night laboring under the threat of a tornado watch/warning.

And spring training is in full swing for baseball.

I am a professed baseball nut. I love it. I love the crack of the bats, the smell of pine tar and leather fielding gloves, I love going to the stadiums to watch, I love the cheap beer and hot dogs. 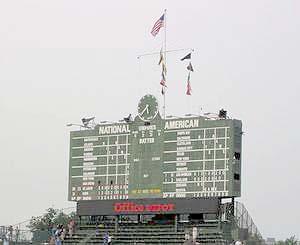 So why am I not looking forward to the start of the 2006 season whatsoever?

I don't want the sounds, smells, and tastes.

I don't want to spend the money on tickets to the games.

I don't want to fight for parking around the stadiums.

I don't want to watch it on TV, nor read about it in newspapers or on the Web.

Hell, I don't even want to play fantasy baseball.

I want nothing to do with any of it.

I can't explain it for the life of me.

The closest I can come to explaining why I feel this way is because of all the negativity already enshrouding the game this season... and it hasn't even started.

The renewed steroid controversy regarding Barry Bonds with the pending release of Game of Shadows, Sammy Sosa holding out for the contract he feels he deserves even though the rest of the sporting world knows he doesn't, Frank Thomas signing with the Athletics for a pittance compared to what he was once paid and then starting a war of words his former team.

Combine this negativity with my reading of Jose Canseco's Juiced toward the end of last season, my desire to read Game of Shadows, and my first viewing of Eight Men Out in nearly 15 years and you've got one cynical Kevin.

Is there any way to save this season for me? Or am I doomed?

And, with my luck, this will be the season that the Cubs will win it all and I won't want to watch a minute of it.

Once it's starts, your ass will be super glued to your recliner, popcorn on the floor yelling for Katie to bring you another beer. Ahhh Americas favorite pastime.

I know how you feel man. I feel this way every year. Why?

Ahh...baseball....does it give me points if I tell you that I used to collect baseball cards when I was younger? I still have some that I think are worth something. I loved the A's...too bad they are kinda booty now. Hope your team does well this year!

I will give you one guarantee you can bet on...............The Cubs will NOT win it all this year. Not until the Trib sells the club and they get rid of Busty Baker and Andy McFAIL! They only Cubs game I will go to this year is when they are in Pittsburgh in April.

As long as the A's stay healthy they have a chance. They are in the week division and the Angels will be down this year. Good Luck big Squirt(Frank Thomas) Boo Frank Boo!

Mikey, ahhh, to live the stereotype! But it will never happen. Katie would kick my ass before I even have a chance to sit on it. Plus, I swore to myself a couple years ago I would never turn into "that guy." It was why I was afraid to really get into sports too much. Even to this day, I still rarely watch much unless Katie is interested as well.

Jacynth, yep, it does. I've still got a few valuable ones, too. Actually, some really good ones. I gave away nearly 10,000 cards to the children's ward of a local hospital some years ago. God only knows what was included in that lot.

MADIRISHMAN... Jason, would this be from you? Sounds like you. He shares the same opinions you have. Hmmm...

Either way, it's bloody brilliant.

I hope this is a good season. The vibe in Chicago is great when it is baseball season - even if it is also filled with debates!

Cheap beer? I obviously live in the wrong city.

Kilax, I agree that the vibe is always good. Simply because of our whole "Wait until next year" mentality. We are the most upbeat losers in the baseball world.

Nat, I was talking more in terms of quality as opposed to price. After all, isn't Old Style the official beer of the Cubs? Nothing's cheap at Wrigley, or Comiskey for that matter.