Hot dog and a shake, that's what you're hungry for...

I've been a Chicagoan (more specifically, a Chicago suburbanite) for nearly 19 years now and I love it.  However, there is one facet of this life that I just cannot seem to embrace. 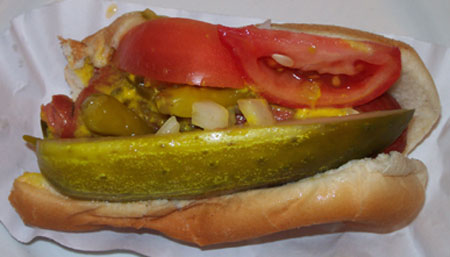 (photo from www.phooeyhoo.com - a person who actually likes these things)

Some call it a work of art.  Others think of it as the pinnacle of Chicago-born cuisine.

To me it's nothing but a train wreck on a bun.

Here's the laundry list of "ingredients," for lack of a better word, contained on this beast:

Look at all that crap.  I know it says there is a hot dog in there somewhere; but where exactly?  I certainly can't find it.

Before you go and say, "you've gotta try it before you pass judgment on it," I would like to take this opportunity to detail my experiences with the varied items that top this tubular anomaly.

Yellow mustard... nope.  Don't like it.  I will admit that I'm starting to develop a taste for Grey Poupon-style mustard.  But only in small amounts.

Sweet green relish... I don't mind it terribly.  But I prefer it when mixed in with stuff like tuna salad and egg salad.  I've never really had it plain before.

White onion... I've never been much of an onion boy.  I always find them to be too extreme in flavor and prefer them in moderation and cooked down so the flavor isn't quite so harsh.

Marinated hot pepper... never been much of a fan although I do eat them sliced, occasionally, on nachos.  I've never eaten them whole outside of a situation in which a dare was involved.  What exactly are they marinated in?

Dill pickle... just. plain. evil.  I can't take pickles.  But it's funny, because I will eat a few other items that have been pickled.  Just not cucumbers.  If God meant for cucumbers to be shriveled and smelly, they'd come out of the ground that way.  It's just cucumber blasphemy, I tell ya.

Celery salt... not bad.  It can be a bit overbearing at times, but it is generally a good spice.

So, as you can see, I have my ups and downs with the amalgam of tastes on this "delicacy."  However, I just have trouble fathoming the idea of eating all these things together in a single bite.  No, I'm not one of those people who sets clear boundary lines between items on his dinner plate and finishes each item one at a time.  Not at all.

But I am a simple boy.

My ham- and cheeseburgers only have lettuce, tomato, and ketchup on them.  If I'm feeling really exotic, I may put a little mayo on it.

Pizza usually only has one or two toppings on it at a time.  Pepperoni, sausage, and spinach are my go-to favorites.  Those mega-topping pizzas that Pizza Hut and Domino's, among others, have been advertising in recent years make my stomach turn.

Although the idea fascinates me, my sandwiches have never reached Dagwood Bumstead-esque stature.

While foo-foo umbrella mixed drinks are good every once in a while, I much prefer a simple tequila, Jack and Coke, etc., any day of the week.

And my hot dogs... oh, my hot dogs.  I've only ever topped them with ketchup and, occasionally, cheese.

Yes, I said KETCHUP!  I. like. ketchup.  Now, stop thinking of me as though I'm the Antichrist, will ya?

I've had Chicagoans tell me that ketchup is the downfall of hot dogs.  That you cannot possibly enjoy the taste of a dog with this stuff on it.

To those people I ask, how can you possibly enjoy the taste of a hot dog with everything I detailed above on it?  At least I can taste the hot dog!  And, as it's the focal point of the name of this menu item, I think it should be the most prominent taste, don't you?

However, as I have lived in this area for nearly 20 years of my life, I almost feel as though I need to try one of these monstrosities just to be able to say, "I did it."  This may be as close to a Fear Factor moment as I ever come in my life.

But I need some help.

Tell me that when all these disparate tastes are brought together on reconstituted pig parts, they all cancel each other out and I won't taste any of it.  Or tell me that the flavors or odors, when mixed, work like a sort of novocaine for your taste buds (that would go far to explaining their popularity in this city).

Reassure me that no permanent scarring will occur to either my psyche or my stomach lining.

Convince me that this is one of those "moral imperative" situations that I must endure to truly be a Chicagoan.

That hot dog sounds perfect to me... minus the meat :)

Wouldn't that just be a relish tray with a breadstick?

I miss Chicago style hotdogs. I typically hate hotdogs, but with all this stuff, you can't taste the dog. Probably why I like them. I do edit the ingredients some. Below is how I would make mine (you can't get them in NYC).

Actually, looking at this, I don't really eat a chicago style hotdog at all. I've created my own yummy version. Oh, and you can't put ketchup on it. Yuk. I'm generally not a big condiment person. A little pickle relish on some things or the occasional barbeque sauce on my chicken nuggets, but that is it.

That picture looks like the vegetarian version of a hot dog to me. Give me a kielbasa any day. (Um, and that shouldn't come off as dirty as it sounds.)

I was waiting for some kind of offhanded sexually inclined remark to this post. Go fig it came from you, Carly. Heh.

Allison, I think some places actually do use cukes instead of peppers. Or at least I would swear I've seen it before. Yours doesn't sound half bad. Just lose the dill pickle and you're set.

I'm nothing if not predictable!

I look forward to your comments.

Having lived in Chicago for a few years, do I have some street cred on this one?

What the hell? It's Where's Waldo in a bun.

Whatever. I hate hot dogs.

Veggie-Dogs are magically delicious... but I don't think eating one Chicago-style would be something I'd want to try.

oh dear. I got reflux just from looking at it!

Sandra, if it helps support my belief, you can have all the street cred you want.

Rabbit, you're not kidding. I'm not entirely convinced that there really is a hot dog in there.

Dave, so Veggie-Dogs = Lucky Charms? Wow! Is Veggie-Dog the actual brand name? I may have to try them for kicks. And, yes, ketchup is a very good hot dog topping. Yet, in Chicago, if you ask for Ketchup, they either laugh at you or kick you out of their store.

It seems odd to have sweet relish and a dill pickle on the same dog. I only like two brands of hot dogs that I know of. I'll try others and that's where masking flavors helps. I think I could manage at least a bite of the Chicago dog, but it would have to be minus onions.

Oscar Meyer's I'll eat with ketchup, mustard, and relish (or some variation thereof) and Worhle's I take with sauce (chili) and mustard-a specialty at a local bar here.

Good luck and take some tums or something with you if you decide to try it.

Never heard of Worhle's. Is that a local thing, too?

I just tried some new brand of hot dog recently and they're really good. Can't remember the name offhand, though. I already threw away the wrapper. I'll have to run by Jewel sometime and see if they have more.

There will be Tums o' plenty with me if I partake in this venture.

I suppose they are local. I've never really looked for them because I just get them at this one place. They're small, only about 3 inches long, so it's easy to order as many as you feel like eating on any particular day.

Oh, the damage I could do and am glad I am unable to do.

That looks wonderful to me, minus the peppers. I don't like food that bites back.

Wait, no. Relish OR dill pickle. Not both at once!

But where's the chili???

Nothing better than a Vienna beef Chicago style hotdog, unless of course your have one of their Polish sausages.

Besides, your picture did the great dog a disservice.

Don, I'm trying to build up the willpower. Really, I am. It's just not easy.