This is the time of year when most people do their recaps of the year (see the Xtine Files for examples).  Seems like an appropriate time, wouldn't you say?  The problem is that I'm having some trouble figuring out my lists.

You would think that, being me, the natch approach would be something like:

Well, for me, it doesn't work out quite that easily.

When it comes to TV shows, many of you already know I award the Kapgar.com Primetime TV Awards in the spring (usually the beginning of April or May) simply because I like to do it when most networks are in the rerun season or close to it.  Just makes sense to me.  I like to be able to consider midseason replacements in there as well.  If I do it at the end of the calendar year and not the programming season, I will likely forget the midseason replacements from the season before.  I still mourn you, Eyes.

I read scant few books this year compared to past years simply because it's hard to read for fun while you're reading for classes (damn MBA program).  Plus, I think I may have only read one or two that were actually published during calendar year 2005.  So I don't feel like I would be doing the publishing world any justice by giving them a top 5.

I also have trouble with my top movies of the year because of the controversy surrounding when they were actually released.  For example, the brilliant film Million Dollar Baby with Hilary Swank, Clint Eastwood, and Morgan Freeman.  That movie officially came out on December 15, 2004. However, this was a limited release in just New York City and L.A. intended to get the film out in the marketplace for Oscar consideration by their cutoff.  To me, and most of the rest of the U.S., this movie came out on January 28, 2005, because that's when it went into wide release.  Does this count as a 2004 or a 2005 release (I could care less what AMPAS says)?  For me, that would be one of my top films of the year.  Easily.

And then there's music.  Ah sweet music.  Much like books, though, I don't necessarily wind up picking up CDs in the year they were released.  So I've got to do some mining to find the actual release dates to make sure I pick legitimate 2005 albums.

It's such a headache.

But I think I'll try anyway.

And to start, I'll run with Kapgar.com's Albums of the Year.

After much deliberation and release date lookup, here is what I have for you (I actually posted this already in a comment on Xtine's site, but she said I can steal it for my blog as well)... 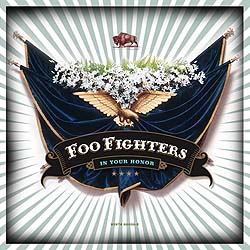 1. Foo Fighters - In Your Honor
I think any release by the Foo Fighters would wind up on a best-of-the-year list of mine in any given year in which it's released.  That's just the depth of my love for this band.  And this was a two-disc set, to boot; the first of which is the heavier stuff while the second disc is a bit slower with some acoustic numbers.  Some of the better tracks include "D.O.A.," "The Last Song," and "Cold Day in the Sun" which never ceases to remind me of the KISS classic "Hard Luck Woman."

2. Bob Mould - Body of Song
I have loved Bob Mould for some time.  His recordings with both Husker Du and Sugar remain on my regular rotation.  This, however, is one of his first solo efforts I have purchased.  I really don't know why I picked this album up.  There was nothing that really triggered my searching for it.  But I did and it was worth every penny.  Check out "Underneath Days," "(Shine Your) Light Love Hope," and "Gauze of Friendship."

3. Coldplay - X&Y
In all honesty, I loved the first track, "Speed of Sound," but only about the first dozen or so times the radio played it.  I had to go on Coldplay hiatus for about two months before I finally picked up the whole album.  Glad I finally did.  The rest of the album makes up for the fact that "SoS" was so overplayed.  Check out "White Shadows," "Fix You," and "Hardest Part."

4. John Hiatt - Master of Disaster
This is one of those albums I just happened to pick up at the library not realizing that it was a new release at the time.  Spectacular album from a spectacular artist.  If you've ever been a fan of tunes from the likes of Tom Petty and the Heartbreakers and Steve Earle, you have to check this, and his plethora of other albums, out.  Give a spin to "Master of Disaster," "Thunderbird," and "Find You At Last."

5. Bloc Party - Silent Alarm
This is one of the many albums that my friend Eric turned me on to.  I love having friends with eclectic tastes in music.  I learn so much and discover so many albums I never would otherwise.  This is one such album.  I really have no idea how to describe it.  You pretty much have to take a listen yourself and see if it suits your tastes.  Just remember, everyone's different.  You've been warned.  Lend your ear to "Pioneers," "Luno," and "Price of Gas."

Tomorrow: Kapgar.com's Movies of the Year...

Dec 29
In an ideal world, everybody would have vacation for those few days between Christmas and New Years. This, however, is not an ideal world. Hence why, for the last few days, I've been slaving away at work. And only two...
Next Post

Girls on film (got your picture)...

Dec 31
Aye, aye, aye... another tough one. If you recall my inner turmoil yesterday, I have come to a resolution with regard to it. If the film wasn't in theaters in my area until 2005 but was in limited release in...

Kevin, very good choices. The Bloc Party disk is amazing, however, i'm not happy to see the song "banquet" not on your list. unbelievable song, #4 i believe. timing again is off with the CD's becasue i was thinking Killers, but that was beginning of '04, boy time flies. Fall Out Boy is a big one too, but i think that was last year too. Audioslave's new one is good too, not top 5, but very enjoyable. Well that's it, just wanted to say hello really, talk to you soon.

Sigh. Every once in a while I start freaking out because we never did find out all the freaky things going on at "Eyes" which was an amazing, amazing show. I wonder if there are unaired episodes laying around?

Scott, yep, that's a good song on the Bloc Party disc and it should've been included. C'est la vie. And I loved Killers. That is a spectacular disc. But, yes, it was 2004. Not as big a Fall Out Boy fan. They're not bad, but not great. And not an Audioslave fan. Chris Cornell's voice wears on me after a while.

Here's one I did forget... Kanye West... now that I've finally listened to it.

Dave, Eyes was one of mine and Katie's fave shows last season. We tuned in religiously and, often times, watched them more than once since we taped them. I love Tim Daly and he's the reason we watched. It was such a well-done show.

I see I am not alone in wishing The Killer was a 2005 release (for list purposes only).

Glad you like the list. Ticks me off that I couldn't include it as I'm addicted to the album and I didn't even really discover it until 2005. Dang it!

Hey Kevin! I saw my name and had to leave a comment! I will be sending you another CD of stuff soon! Glad you liked Bloc Party! I like exclamation points!

Yep, that be you! That is a good CD. I was thinking of picking up some more stuff from them on iTMS.

I know I've got more new stuff for you. But since I moved all my songs from the work Mac to the new home iMac, I dunno what's new stuff to you anymore. I'm going to have to play a guessing game. But I also haven't been to the library in two months, so it shouldn't be that difficult. Let me know what some of the most recent stuff was that I sent you and I can try to guess from there.