But the wind blew me back via Chicago...

I knew when I published both the December 23 and December 24 posts that things would never quite work out the way I had envisioned them.

Why do I even bother?

I would've been better off posting some fluff links to Christmas sites to get everyone in the mood and just said "we're going to Chicago, see you in a few" and let it at that.

What I'm trying to say is that our visit to Chicago was only remotely like how I posted it might be.

I knew, as soon as we went to check in at our first hotel on Thursday night that my entire post was already blown to hell in a handbasket.

So, here's what all really happened.  And it's actually a bit more interesting than the false reality I created before...

We arrived at the Wyndham Hotel (conveniently located one block behind the Apple Store. Score!) at about 11 p.m. on Thursday night to check in.  We were really late because we went to Katie's parent's house for several hours and had dinner with them.  Then we went to Best Buy because we were trying to make an exchange on a Christmas gift for one of her brothers that didn't quite work out as planned.

When we tried to check in, the guy at the counter (David the Hotel Checker Dude, or as I shall refer to him, "DtHCD") looked at us and said, "I have good news, bad news, and a proposition.  Which would you like to hear first?"

DtHCD - "The good news is that the Wyndham is a very nice hotel."

Nice hotel, but a bad sign for things to come.

DtHCD - "The bad news is that we overbooked our very nice hotel.  We have a room if you absolutely are not in the mood for our proposition, but you two look like nice people who are in a good mood, so we hope you are willing to accept our proposition."

DtHCD - "We would like to move you to another hotel for tonight and we will then have a room for you tomorrow."

DtHCD - "But we will pay for your room tonight and upgrade you to one of our living room suites tomorrow night."

DtHCD - "The Westin Chicago River North near the House of Blues.  It's a nice hotel as well and they have one of their corner suites reserved for you."

We got our car back from the valet service and drove our way over to the Westin.  I wasn't sure what to expect as I didn't have a chance to look up the hotel online or see any photos or have any prior experience with the hotel whatsoever.  But when we got there... woah, mama!  It was a beautiful room.  One, we decided almost immediately, we would rather stay in regardless of what they were offering us at the Wyndham.  We couldn't possibly imagine a nicer room than what we were now staying in... and for free, to boot! 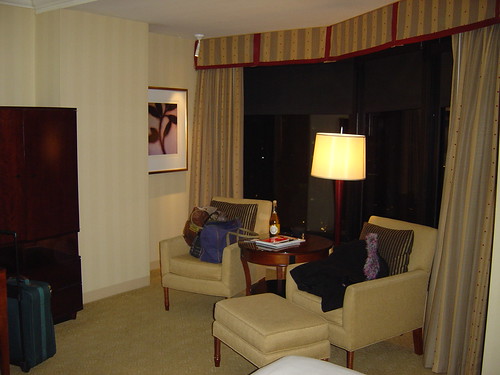 That night, we stayed in bed and drank some champagne and ate some chocolate covered strawberries I picked up from a place we love in Geneva.  We watched something on TV while we ate and drank, but I'll be damned if I remember what it was.

We slept in until about 9 the next morning and headed out to Marshall Field's in hopes of having breakfast under the tree.  Yeah, no.  If we waited, it would have been for dinner by the time we got through line.  Well, not literally, but close.  There was a two-hour wait once you got your pager for seating.  However, there was a two-hour wait simply to get a pager. 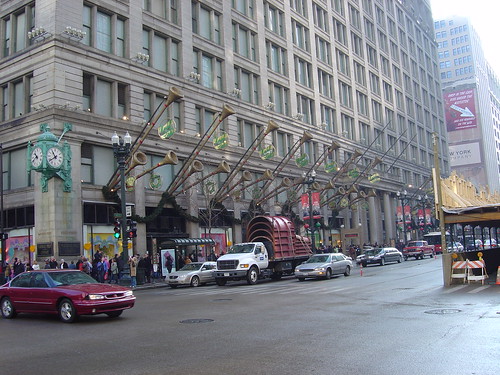 We looked around the store a bit to see what was available and then went back to Harry Caray's restaurant for an early lunch.  Much easier in and out and probably a lot cheaper.  The food was incredible as well.  Katie got boneless chicken vesuvio and I had baked lasagna.  Tasty. 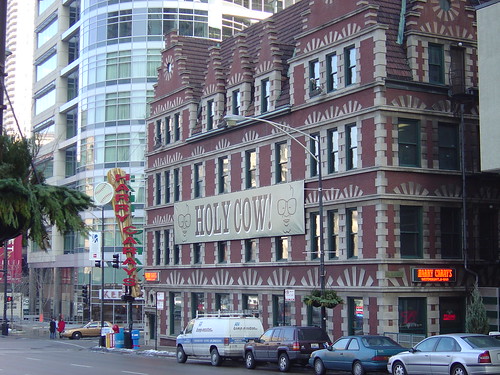 After doing a bit more shopping in and around the State Street area, we went to Millennium Park and walked around a bit.  Hey, I saw several Segways!  Go figure that it takes me posting about it to actually start seeing them.  Of course, they were only being used by cops and, ironically enough, one of them must've been broken down because the cop was walking it instead of riding it.  Funny. 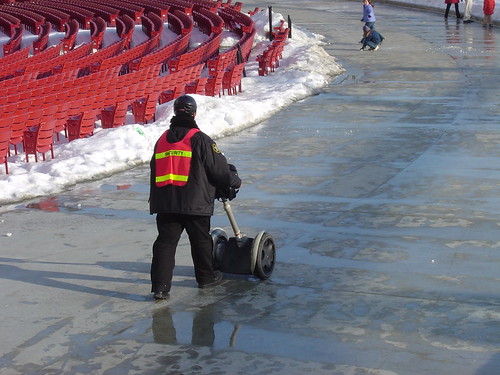 And, even though we were discussing nixing it, we did go to the Art Institute.  We didn't spend a lot of time there, but we saw the Japanese, Chinese, and Korean displays; the Impressionist and Post-Impressionist exhibits; and the photography exhibits.  They were stunning and, in the photography exhibit, I found out about some new Chicago photographers that were incredible and I will probably try digging up some more information on.  Quite impressive work. 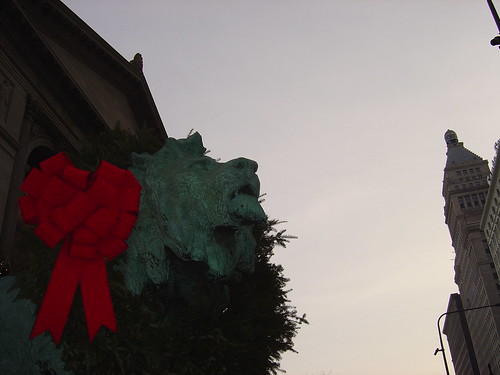 Next, we headed back to the Westin to grab our stuff and move back to the Wyndham.  Yes, the room we received was huge and we were not upcharged at all for the upgrade; but, when compared to the impressive beauty of the Westin, it just paled.  Maybe if we didn't have the Westin as a point of comparison, we would have liked it that much better.  But, it just seemed so impersonal.  Huge and vacant.

So we left and did some walking around on the Mag Mile.  First, we found Ethel's Chocolate Lounge in the North Bridge Shopping Center on Michigan Avenue.  Katie had discovered the Naperville Ethel's a few days prior and wanted to take me to this one.  It was wonderful.  Pricey, yes; but damn good chocolate.  Of course, while in North Bridge, we hit the Lego store.  As I've said before, once a geek... 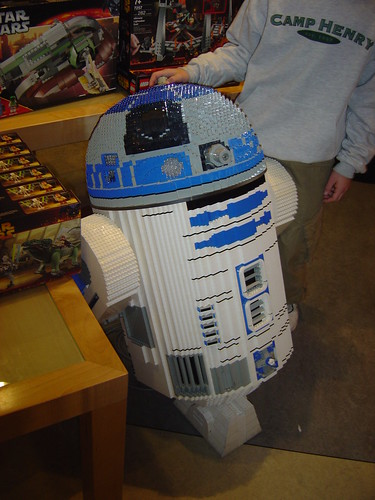 After walking around for a while, Katie's feet and calves were getting a bit worn out, so we went to an AMC and sat for a bit and watched Fun With Dick and Jane.  Not a fantastic movie, but still enjoyable.  And, you must watch the end credits.  The beginning of them had Katie and I rolling with laughter.  If you know anything about the travails of modern business, you will love them, too.

Now that we were a bit more rested and relaxed, we hiked over to Ben Pao's Chinese restaurant.  Wow!  It blew me away.  Katie was here a few months ago while I was in Florida for Nano's birthday and she's been raving about it ever since.  We finally had a chance to go and I would recommend that you do the same when you're in town. 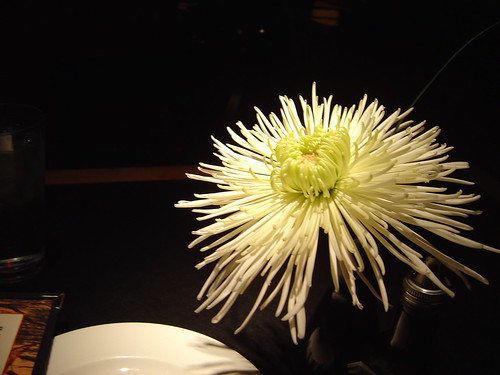 A flower on the table at Ben Pao

By this time, it was pretty late and we were dog tired.  We went back to the hotel and pretty much crashed.  Hey it had been a long day.  Yes, this was all just Friday.  Wait until Saturday.

More photos are available at Flickr. (ed. note... whoops, forgot to make this a link.  Sorry.)

I've stayed at The Westin, and agree it's a very nice hotel. My favorite, however, remains The Hard Rock Hotel, with the W Hotel a close second. Unfortunately, they are both pretty pricey, and so I don't get to stay at either very often. Though I guess it's all relative, because ALL downtown hotels in Chicago are pricey!

The only hotel I've ever stayed at in Chicago -- due to the fact that I have an aunt & uncle and friends there and therefore several places to mooch shelter -- is the W. And I have to agree with Dave. It rocks. But I kind of adore hotels in general. Just a thing I have...something about somebody else making my bed and keeping the room clean. Although the concept of renting a bed...well, it is a bit odd.

Sandra, it is nice to have relatives in the area so your stay is cheap. But, sometimes staying in a hotel is a must if not for the chance to "get away" then for the mystique of what you might uncover in that room. Not intended in a bad way, but simply that photos on web sites rarely capture how a room truly appears when you first see it. I look at the photos of the Westin that I took and they look very dissimilar to what I remember actually seeing.

Dave, did you stay at the River North Westin or the one up by the Drake? I want to stay at the HRH and I think Katie wants to give it a shot as well. But it's going to be hard to convince her to stay elsewhere now that we've had a taste of the Westin. The W was one of the hotels recommended to me when I was searching for a place to stay but the prices were ridiculous. Over double what we paid at the Wyndham.

I went to Chicago, too! Funny, I thought that was you at Marshall Fields!!

Good thing you visited before next year, when Marshall Fields will be called MACY'S.

Ya know, I was pretty sure that was you across the aisle from me in the slinky undergarments department. But I didn't want to call you out. That's just bad shopping etiquette.

As I said in an earlier post, I will always call it Marshall Field's. I don't care. Changing it to Macy's is just wrong.