Home Archives Profile Subscribe Links Rankings
We'll do the Mash; we'll do the Monster Mash...
I smell a lawsuit.

Overheard from Trick or Treaters...

[in response to my noting that it was rather wet outside] "Ah, who cares.  It's Halloween."
'Nuff said.

[in reaction to my neighbor's door being answered by her dog] "That's a big dog."
Rather Sandlot-ish, wouldn't you say?

"Thank you"
Who says teenagers can't have manners?

"Trick or treat, smell my feet, give me something good to eat; if you don't, I don't care, I'll pull down your underwear."
Ah, the classics endure.  I wonder if she realizes how awkward it is for a 30-year-old man to hear a 6-year-old girl threaten to pull down his underwear?

Even though teenagers may want to still trick or treat, I think they realize that they are beyond their candy-grubbing prime.  Evidenced by two teenagers who came to my door dressed in goth rock clothes (not a costume - probably what they wear to school any given day) with some make up and hair dye (I hope these parts were solely costume in nature) who had shame-ridden grins on their faces as they sheepishly proclaimed "trick or treat" and actually said "thank you."

Telemarketers don't even take a break for Pagan holidays.  You would think being the spawns of Satan that they are, they would worship appropriately.  Bastards.  (yes, I know "Pagan" doesn't necessarily equate to "Satanic"... deal with it).

Even when TnT'ing ends, there will still be stragglers.  Three of them came by after 9:00 p.m.  Nobody in between.  I can hear The Voice from Field of Dreams... "Turn on your porchlight, they will come." 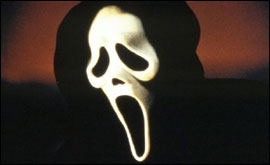 Regardless of how cliche Edvard Munch's "The Scream" may have become in its use as a Halloween costume (damn you Kevin Williamson and Wes Craven), it can still be pretty freaky seeing that mask stare back at you through a glass stormdoor at a little after 9:00 p.m.

Kid who couldn't decide which Chicago team he liked and wore bits and pieces of several uniforms.

KGB assassin dressed as a milkman (oops... sorry... I was watching The Living Daylights as TnT'ers came by).

28 Trick or Treaters total.  Woo hoo!!!  I can now put to rest the specter of failed Halloweens past and look forward to the new homeowner era of Trick or Treating!!!  I'm a happy camper.

We watched The Amityville Horror remake last night. Have you seen it yet?

It's not bad for a remake.

My trick-or-treaters were actually really polite too! The majority of them told me "thank you" and to "have a good night" I was kind of shocked but really impressed. I also asked one of the kids what he was and he said "I'm too old to dress up" ummm... wouldn't that signal that you might be too old to be going door to door for candy as well? Get a job and buy your own.

Yeah, I would think that would be a sign. At least, even as a teenager (and once as a college student), I still dressed up for the occasion. That's most of the fun.

Kevin, your delight at actually having trick-or-treaters come to your door is SO apparent in this post! Glad you had a wonderful Halloween in your lovely new home.

But, ahem, I worked as a telemarketer for 8 months in 2001. I don't consider myself the spawn of Satan. I just had a kid to feed. (True, I could only stomach it briefly.)

Actually, I was a telemarketer for a year as well. I hated myself after that job. I hated knowing that I was interrupting people's time with their families. I couldn't take it. I quit as soon as I could find another good job. Blech! Never again.

I had two girls who looked to be about 25 tell me they were 15, and then go on to do the whole Coffee Talk thing from SNL. No 15 year old even KNOWS that sketch!

No Trick or Treaters at my place...but my guess is that had just a bit to do with the fact that I live in an apartment building with a locked main door...

It sounds like you had a lot of fun with the trick or treaters! I am surprised that so few kids actually show up when people hand out candy, when I was a kid, I felt like I went to at least 100 houses... Wasn't everyone as sugar-obsessed?

Pauly - did they at least do a good Coffee Talk rendition? If so, the entertainment factor alone forgives their age. I'd give 'em the candy anyway. You gotta have guts to go TnT'ing at 25. Even I don't have that level of nerve.

Sandra - yep. I'm thinking it's all about the lock.

Kilax - I know I was sugar obsessed. Can't speak for the rest of America. However, the diet mentality is invading the mindsets of progressively younger kids these days. So, maybe they aren't. Sad.

Kev, you should come hang out with us on Halloween. We go through 8-10 of the giant Sam's Club bags of miniature candy bars. We only give out 1 to each TnT'er because it costs about $100 to buy enough candy that we don't run out before the end of the night. Plus, TnT hours are only from 6-8 pm. The police literally block off the streets and they SWARM with little trick-or-treaters for the entire 2 hours.

One guy (he's been a judge for as long as I've lived out here) uses it as a chance for last minute campaigning to the parents of the little buggers who all stand around waiting for their kids to get through the mob.