Home Archives Profile Subscribe Links Rankings
Too much, too much...
Wake me up when this music ends...

That would be the equation that defined my night last night.  And, no, I wasn't selling myself on the street corner or the resulting dollar amount would have been a negative, I'm sure.

I played poker last night.  And, for the first time in my life, I won.  The whole enchilada.  It's MINE!  Gimme! 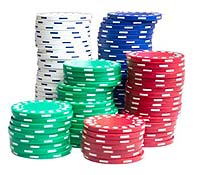 I don't know how or why, but the cards were on my side last night with six friends playing Texas Hold 'Em.  It was so pretty.  I won the first two hands of the game pretty big.  People were betting large and I won them both.  It became a bit more conservative after that and I wound up not winning or losing too much in the next eight to ten hands.  Then I took a few more of the next several.

As the stakes increased and the blinds kept doubling (roughly every 20 minutes), I kept playing it down.  I took only a couple here and there, but enough to keep me in the game.  With four guys left, I was actually number three in terms of chips.  But a couple of big hands, which I won with a flush and a full house, made me the chip leader.  I went back down a bit after that and lost my leader status.

Then came the final hand.  Three of us still in it.  I had a 2-3 suited and decided to stay in.  Normally, logic would have dictated that I fold.  Why did I stay in?  Because the last four or five hands had been won with absolute squat.  Pair here, two pair there.  Nothing big.  Plus, I was once again the chip leader.  Even if both of the remaining guys went all in (which they did), I would easily have it covered and enough to still hold my own against them should another hand be played.  I figured I'd play it.  And the flop had a 2 and a 3.  Oh so pretty.

Most of my bets were pretty conservative.  I raised only a few times here and there and not a whole heckuva lot as my confidence isn't quite where I would like it to be.  And I had a few friends groaning here and there that I didn't just go all in on a couple or raise the stakes higher.  But I was afraid of losing the person I was betting against.  With how conservative my betting was up to that point, I would've thought a big bet would make the person think I either had a great hand (which I did in some cases) or that I was bluffing like a mutha (which I am seemingly incapable of doing... gotta work on that).

I've never won a game of poker in which we had real money going around.  No, it wasn't a lot of cash, but it was certainly a bolster to my card-playing ego.  Especially when you consider that I'm not much of a card player.  I took it and ran.  Well, not literally.  I did stick around for a few more limit games that we just bought in as we went.  Lost about ten bucks there.  No big deal.  But it felt great having that small wad of 20s in my back pocket as I drove home to Katie.

Awesome! Do something fun with the extra cash!

At this point, we're not sure if it will be used for credit card bills, Christmas gifts, or whatnot. It's nice having that extra cash cushion, but there are so many things we could use it on. Maybe we'll just bank it for a rainy day as though we never actually "had" it, if you catch my meaning.