Let your body do the talking...

And that's exactly what Dave Gahan did.  The man strutted, he crooned, he sauntered, he practically made love to his microphone stand. 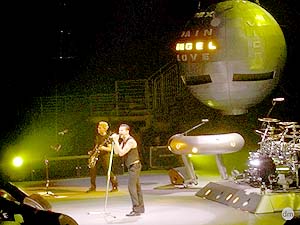 And he, as well as the rest of Depeche Mode, were on fire last night.

The DM portion of the show started at a little after 9:00 p.m. (CST) and lasted for a good two hours.  During that time, the band covered just about all their major hits (minus a few notable exceptions) while Gahan progressively lost more of his clothing and Martin Gore looked like a hen that had been dipped in tar.

I have liked Depeche Mode for years but I'm sure I'm not the world's biggest fan.  But that band put on a show that could convert even the staunchest nonbeliever and have him or her waving their arms in the air in time with the other several thousand people that jammed themselves into the All State Arena in Rosemont, IL.

The power was completely undeniable.  The sound system was easily one of the best I have ever heard for a show and the vocal to music levels were perfect.  There wasn't a single point in the show when you couldn't perfectly hear either Gahan or Gore unless it was completely intentional on their part.  Not only did the sound system shake you to your very core, but the way in which the band played it convinced you that there was nothing in this world more important to them than their music and our personal enjoyment and appreciation of it. 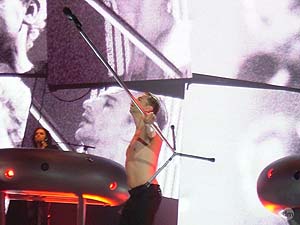 But there was one thing I found interesting... just how much Gahan's stage antics and presence reminded me of the late, great Freddie Mercury of Queen.  I have never seen Queen play live, but I have seen quite a lot of video footage of Freddie hamming it up the way he was known to.  And that's exactly what I saw on stage last night.  There was nothing but raw sexual energy oozing out of every single pore of Gahan's body.  I am a straight man, but even I found myself muttering "dayyyamn" under my breath.  That microphone stand could file a harrassment claim against him and it would hold up in court, I tells ya.

It was a great show.  If you have a chance to go sometime this tour, jump through whatever hoop you need to in order to go.  You won't regret a single minute of it.

Oh yeah, that brings me to the infamous Dave of Blogography fame who attended the show with Katie and I.

Unfortunately, we didn't have much time to meet up beforehand and hang out.  We got together outside the stadium just as the Raveonettes were starting their set.  So we went in and talked what little we could during the show and in between sets.  Then we talked some more after the show before we went our separate ways (he had to catch a redeye out of the Windy City).

He does not look like a cartoon.  Yes folks, he's a real boy!  And he's taller than I thought he would be.

Dave is a very cool guy.  He and I were cracking wise during the shows (especially the opening act) and it seemed, at least to me, like we had known each other for quite some time.  I guess that happens when you consistently read each others' blogs.

I only wish I had more time to hang out with him and talk without having to compete with the music.  It seems like we could have a lot to say and have some fun.  Even Katie, who hasn't really read his blog too much, said he was cool and very easy to get along with.

So, Dave, like I said after the concert, let us know when you are back in town and we'll do what we need to in order to get together.  I promise you a spinach and parmesan stuffed crust jobber from Giordano's since you didn't get that particular type when you went there yesterday.  Mm, mm, good!

If any of you ever have a chance to meet him during one of his famous globetrots, do so.  I'm sure Kazza would agree with me that he's a good guy.

Happy birthday to you (one day late)...

I've got the power!

Dec 1
I think Papa Nicholas and the Lord Almighty both really want to make sure that I'm in the mood this season. It's no secret that Christmas is not my favorite holiday (that honor goes to Halloween); but I don't particularly...

YESSSSS! Fooled another one! If this "Dave is a good guy" reputation starts to spread, nobody will ever suspect me when I decide to turn to a life of crime.

I am a HUGE Depeche Mode fan and totally loved the concert. Naturally, I want one of those chicken suits that Martin was wearing quite badly. Naturally, that will be the focus of my blog entry today... :-)

You got to meet Dave?! That is so cool!

Yes, he is a *way* cool guy :)
And I owe him dinner if he ever gets his butt over to Australia :)

Dave, hey! You called me "alarmingly nice"! What did you expect? Honesty? I don't think so.

Kilax, yep we did. Next time he's in town, you should make the trip back from Ames and hang out with us. Damn, we'd feel old.

Kazza, did you promise vegetarian? I would think that would make him hop a flight tomorrow. Hmmm... Australia... *drools* I was almost born there.

You would think, wouldn't you? I'm not sure what the story is or if it's even interesting. My parents have never really told it to me. I may have to ask.