Home Archives Profile Subscribe Links Rankings
I can't stop this feelin', deep inside of me...
Awooo... werewolves of London...

Ooohhhhh... two posts in one day!  Hey, can't help that I've got lots of cool stuff to discuss.  Actually, it's a bunch of smallish items I wanted to mention.

Of course, this just means that I won't have jack to talk about tomorrow.

However, this first bit is somewhat time sensitive and must be mentioned today, lest it be too late.

International Something For You Day:
Tonya at Adventure Journalist has declared today a new holiday.  Specifically, International Something For You Day.  Your task, should you choose to accept it (and I see no reason why you wouldn't want to) is to spend $25 on yourself.  Be like Tonya and buy something off your Amazon Wish List, go get a manicure/pedicure, get a very inexpensive lap dance (Johnny?), or fuel up your truck like I am for a cruise around the area taking autumn photos.  Whatever you choose, make it something for you.  And make sure to mark your calendars for next year.  This one's definitely worthy of inclusion in the annual holiday rotation.  Heck, as far as I'm concerned, it trumps quite of a few of the standards. 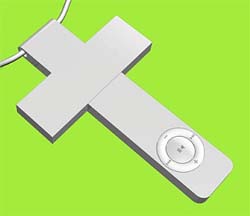 iBelieve:
If you own an iPod Shuffle, might I suggest spending half that amount on a new accessory?  iBelieve is a lanyard and replacement cap for your Shuffle that converts it into a rather large, white plastic crucifix to hang around your neck.  I find this thing to be absolutely hilarious.  And, yes, it's legit.  The order function really does work.  No, I did not order one as I do not own a Shuffle.  But, this accessory alone almost makes me want to buy one.

Google Moon:
First it was the entertainingly interactive yet completely worthwhile and utilitarian Google Maps.  Then, we all had fun watching the camera zoom into our homes and whip around the planet with Google Earth.  Now, you can view the lunar landing sites of the late 60s/early 70s with Google Moon.  Just promise me one thing, you will zoom in to the landing sites as far as the map will let you go.  The detail is amazing!

Ted Allen:
I dunno how many of you are fans of Queen Eye for the Straight Guy, but their resident food and wine expert, Ted Allen, was in Naperville, Illinois, last night signing copies of his new cookbook, Food You Want To Eat: 100 Smart, Simple Recipes, at Anderson's Bookshop.  Being the cookbook junkie that Katie is, she really wanted to be there.  Alas, she was working until 9:00 p.m.  So I went in to the signing for her.  He and Kyan were always my two faves on the show, so it was cool being able to meet Ted and have him sign the book as well. He really is a damn funny guy.  I've got a couple photos of him at the event up in Flickr (Photo 1 | Photo 2).

The ibelieve is glorious. I think God is laughing too!

Oh, that's not fair! I didn't read this until late last night. All I bought for myself was a BBQ Chicken burrito from Gus The Food Guy. I want an extension.

Johnny - It is my firm belief that God has a great sense of humor and loves jokes and whatnot. That's why I don't understand this whole solemn prayer thing. Why not just have a casual conversation with God like you would with anyone else? I think God might enjoy it a bit more. After all, she does like skeeball (see Dogma for the ref).

SJ - You'll have to ask Tonya for the extension. It's her holiday.

iBelieve is the next WWJD bracelet.

Well, with how many of those WWJD bracelets were (and still are) around, that bodes well for Apple's stock. ;-)