Home Archives Profile Subscribe Links Rankings
People are strange...
I'd like to say, have a happy holiday...

I can't stop this feelin', deep inside of me...

Oooohhh, today is not going to be good.  I just know it.

When the first thing you do upon waking up is to flick off your alarm clock... well, it's just not a good sign for things to come.  It's an inanimate object, for God's sake.  The sacred middle finger should be reserved for stupid people or select inanimate objects that portray stupid people: TVs, radios, movie screens, caricatures/photographs of George Bush, etc.

I'm just not going to like being awake today.

Was it just me, or were HIMYM and 2.5M absolutely hilarious last night? 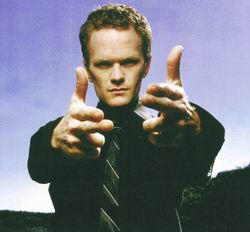 HIMYM is not the greatest show I've ever seen, but it has gotten progressively better with each episode.  And, damn if it isn't good to see Neil Patrick Harris back on the small screen.  The actor formerly known as Doogie Howser, M.D., steals every scene he even remotely occupies in that show.  And he's not even the primary star.  He's definitely a frontrunner in the Best New Comedy Actor category of the Kapgar.com Primetime Awards (fourth annual awards due out in May, maybe April).

While 2.5M started out a bit slow and weird, the last ten minutes more than made up for it.  I couldn't stop laughing when the coven drugged Charlie (Charlie Sheen) and were carrying him into the altar room chanting "anoint him... anoint him..." and he broke into a chorus of Blue Swede's "Hooked on a Feeling."  And then seeing their mother (Holland Taylor) dressed as the Wicked Witch of the West -- and playing out the role quite well I might add -- was just classic.

To the outside reader, it may indeed sound like we watch a lot of TV.  And, by comparison to a lot of other people, we probably do.  But, Katie and I have cut nearly six hours of shows out of our weekly TV viewing schedule, and we even officially cut one more last night by axing The Biggest Loser (sorry, but it just sucks this season).  So I don't really feel that bad about it.  Heck, depending on how they play out over the next few weeks, we may cut a few more out of the regular viewing lineup.  We shall see.

And to our alarm clock, I apologize.  You are just doing your job.  Please don't take my outbursts personally.

Neil Patrick Harris is gold. His appearances in "Harold & Kumar Go To White Castle", "Undercover Brother", "Starship Troopers" were totally great, and it was only a matter of time he got back on television.

Unfortunately, he is the best thing about "How I Met Your Mother," which is scary considering he isn't the main character. I wish they would play up his part even further, because every memorable moment for me has him in it... I can barely remember anything from the past episode except him grinding with his cousin. Everything else is forgotten!

He was great in all those movies. For me, especially, in Undercover Brother... a movie that I have a totally unhealthy obsessive love for. Sad, I know. But I just can't turn it off. It cracks me up to no end.

Is it wrong that I wish he'd write diary entries - a la Doogie Howser - at the end of each episode...?!

I was hoping that's what his much-touted blog would be. CBS.com actually does have a "Barney's Blog" up, but it's not a true blog and I highly doubt it's written by him. But what a cool marketing gimmick it would be if NPH did maintain that blog himself, in character.

But, you're my wingman!

Does anybody else remember a short-lived TV series called "Stark Raving Mad"? Tony Shaloub (whom I adore) starred as a mystery writer who plotted his books by acting them out. Neil Patrick Harris was an editor hired by the publisher to help Stark break his writing block. His character was germ-phobic (shades of "Monk"!) Wonderful show, and the two of them were hysterical together!

Yep, I used to watch SRM. Katie was a fan as well. But, then, she is a fan of almost anything NPH does. Plus it had Shalhoub in it. I don't watch Monk (not because I don't like it or anything; I've just never tuned in), but we were both huge fans of Wings.