While my guitar gently weeps.

This morning, instead of getting up for a walk/run like I had hoped, I went for a golf cart trek around my grandmother's country club with my dad.  We went around everywhere and even down this wonderfully creepy dirt road that bisects some swamp land.  The sort of stereotypical swampy area with the floating green moss and trees growing right out of the middle of the water.  Standard Scooby Doo mystery sort of locale.  As freaky looking as it was, I find myself able, as I usually do, to suppress my internal fears and brave it out for the sake of photography.  Amazing what I can do under the protective shield of photography.  Kinda like my own little Superman cape.  More photos that will be posted on Flickr, I'm sure.

We jumped in the rented minivan and, for whatever reason, made our way into a Beall's Outlet Store.  While there and looking at the discount store equivalent of a CD selection, we met this girl who was also looking at the CDs and asked if I saw any good rock discs.  I pulled out a copy of Black Sabbath's Master of Reality and handed it to her.  She said she was the singer/guitarist in a local band that, like any other band, was trying to break through to the "big time."  Well, she may not have actually used those two words in tandem like that, but you get the point.  She started explaining that her band was a mix of Metallica and Slipknot meets Evanescence.  I think it impressed her when I was able to ask "but do you have pipes like Amy Lee?" (the lead singer of Evanescence).  Confidently, she said, "yeah!"  This acknowledgment that I wasn't too old to not know who these bands were resulted in a pretty good conversation about music.

She started explaining her band's history (they all played in their high school band together); where the band name, And More, came from (they were watching a commercial for a Now music CD and, at the end of the list of artists featured on the CD, it said "and more" and they liked it); that her cousin is the former bass player for Papa Roach; and that the Leesburg Wal-Mart had copies of her band's demo disc.  She had none on her so I actually made a concerted effort to find this Wal-Mart because I was pretty intrigued at the idea of being able to listen to a band that was just getting started.

I haven't had the opportunity to listen to an "up-and-coming" band since buying a couple albums from a high school buddy's band, Midian, and seeing them play live both at our high school, in a local music hall later in high school, and again at the college we both attended where they opened for Local H.  Pretty cool to watch the evolution, but they broke up soon after that.  A shame as they were pretty good.

Unfortunately, after traipsing around greater Leesburg and finding the Wal-Mart, I discovered that nobody in either the audio/video section nor up at customer service had ever heard about carrying demo discs for a local band named And More.  Dangit!  I was looking forward to hearing their music.

I don't know your name, girl, but don't go sending me on some wild goose chase.  I was willing to plug your band for free here if the music was good.  Now I've got nothing to go on nor any way to really recommend you.  Heck, I can't even link to a Website for you as "And More" brings up a heckuva lot of possibilities in Web search engines.  Not a good way to start building a fan base.  If you happen across this site while Googling your band's name and would like to rectify the situation by sending me the demos, e-mail me and I'll send you my address (the link is near the top left of any page on this blog).

Somewhere in the mix of going to Bealls and finding Wal-Mart, my dad and I visited a local pawn shop.  Nothing too spectacular.  Actually, a bit of a letdown.  I've never been to a pawn shop before and I may have built my expectations for a selection of cool things up a bit too high in my mind. 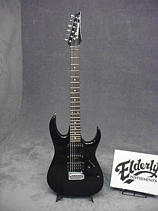 However, I did find one spectacular thing... an old Ibanez EX160 electric guitar.

This was one of the first guitars I ever owned in my high school and college playing days.  The only problem was, being a college student, I needed money.  Since I never really had the time to play in college like I had hoped I would, I found my guitars expendable.  Most of my instruments (three electric guitars, one acoustic guitar, and one electric bass) were not that big a deal to sell.  But my Ibanez was gorgeous and I regret selling it to this day.  It's not an easy instrument to find either.  Ibanez doesn't run the EX series anymore and, from what I've heard, Ibanez's quality of craftsmanship went downhill in the mid 1990s.  My old 160 dates back to the latter half of the 80s or maybe even 1990, at the latest.  Not even eBay has had any of them that meet my mental specs for this particular axe.  I just now found a site that sold one for $90, but, according to them, it needed "some work."

But the one at this pawn shop was almost my old guitar to a T.  The only differences were some superficial scratches and a missing pick guard.  Otherwise... perfection.  And it was only $135.  Well, I shouldn't say "only" as I can't currently afford that price.  After playing around with it a bit and realizing that it had the same smooth action as my old Ibanez, I hung it back up, wept internally, and left the store.

Yet another of those painful "so close, and yet so far" moments that occur in your life.  I wanted it soooo badly, but could not justify spending the money.  I know I will be kicking myself for years to come.  $135 for a guitar is not a bad price, really.  But I just couldn't do it.

Posted in Me & Mine, Vacations & Holidays | Permalink | Comments (5)

Sep 23
I was under the impression, from the day that my mom ordered our plane tickets to come down here to Florida, that we would be flying United... Chicago's all-but-defunct aeronautical pride and joy. However, on the way in to O'Hare,...
Next Post

Sep 25
That would probably be the most appropriate way to describe my current skin coloration. After two consecutive days at the pool (in it, not beside it) with two visits today alone, as well as going on a 2.8 mile walk...

Oh, this is killing me! I can't stand hearing stories of unfulfilled need like this. I will personally contribute $50 toward the Ibanez at the pawn shop. I'll Priority Mail it to your home address, if you email that to me.

Come on, guys! Who else is willing to chip in to help Kevin realize this dream? Skip lunch for a day or something! To paraphrase my beloved Def Leppard, haven't you ever needed something so bad?

I feel your pain. I've been wantting another bass lately. I want to start a band, not that I think it would go anywhere, but it would be fun.

I'd give to the fund, but I just spent way too much on Apple products in the last 24 hours. I know you can relate to that.

SJ, thank you for the offer. You have no idea how much I appreciate it. And I am tempted to send you my address. But I couldn't do that to you. It is genuinely appreciated, though.

Johnny, you make me proud having purchased Apple products. Details? Do you currently play bass and just need a new one or is this a repurchase to get back some of your past life that you sold away like I did? My bass was a Fender P. Beautiful one.

Dammit, Kevin, I'm serious! This would be like me coming across my beloved old Minolta SRT-101 in a pawn shop (which is where I left it, to get money to feed my daughter). I'd probably blow the guy to get it back. OK, maybe not, but the point is I KNOW what you're feeling. Truly, I would be honored if you would accept my contribution.

I know you're serious, SJ. But I couldn't do that to you. I found one, I will find another some time soon when I really have money.

I truly love the gesture and was floored when I read it and was somewhat tempted to take you up on it. Believe you me, I was tempted.