Do iPods have some kind of artificial intelligence somehow hardwired into their systems?  Or can they perform some sort of Vulcan mind-meld with their users? 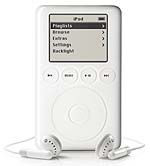 I'm asking this because of something that has been happening lately with my iPod.

Yes, I have playlists on my iPod.  However, I don't really use them that much anymore.  I'm kinda sick of what I've programmed into them and am thinking about deleting them entirely.

Forget about that "thinking" part.  It's done.  They're gone.  As we speak, they are being wiped from my iPod.

Yeah, I just get sick of them anymore.  It's like listening to the same old mix tape day after day after day.

So, what I've been doing lately, aside from listening to my podcasts, is to just take my entire iPod and set it to shuffle.  I never know what song or even genre will be played.  And, when you've got 2,303 songs on your iPod, there is a lot of randomness inherent in this approach.  Since I've copied over a couple hundred albums, in their entirety, there is a very great chance that I don't know many of the songs that are on my iPod.  I just put them on there to give myself a chance to listen to something new.

However, over the course of the last couple days that I've been doing this, I may think of a certain song or band and, lo and behold, that winds up being the next song or band played by my iPod.  It's eerie.  But I like it.  It's like some sort of symbiotic relationship that I am currently experiencing with doPi.

I don't get it, but I won't complain.  He's been picking some great tunes lately.

Heck, last night at the gym, I listened to a run of about seven great songs in a row while doing some cardio.  All were songs that I really like and are easy to work out to.  This morning, on the way to work, every single song that was played was absolutely spectacular.  And just what I wanted to hear at the moment.

Woah... I'm anthropomorphizing my iPod.  But maybe he deserves it.

I have a cd player that holds 200 cds, and I always have it on random, which means you never know what's going to come out of it next, it's very cool :)
What's weirder is when it plays the same song on two different cds in a row .. I have two copies of the Sound of Music soundtrack - one from the movie and one from a local stage show, and a couple of times it's played the same song on the two different cds right next to each other - spooky! :)

OK, this is the first thing I've read lately that's made me wish I had an iPod! A symbiotic relationship with an electronic device that controls the music I hear in my head!!! That is so beyond cool, it's icy.

Forgot to say, I LOVE the song your title's from.

Kazza, I love the whole randomizing thing that we can do these days. I love guessing what's going to come next.

I know what you mean about it sometimes playing the same song in a row from different albums. I've had it happen to me before. What's even weirder is when you see something similar happen on TV or hear it on the radio. There have been several times that I have been able to flip back and forth between radio or TV stations and hear them playing the exact same thing at the exact same time. Scary stuff.

SJ, it's very cool and it's only gotten stranger since yesterday. doPi was playing a string of very highly charged songs before my softball game and, after the game, which I had done terribly in, I got a string of slow moody songs without making any changes on my Pod at all. I just turned him back on on playing from the same point where I shut him off. He also seemed to know that I was in a bit of a goofy mood yesterday after work. I had been joking around with coworkers and whatnot most of the afternoon. I left work and turned on my Pod and he gave me the one-two punch of Johnny Cash's "Why Me Lord?" followed by the seemingly polar opposite, Prince's "Scarlet Pussy." I know I'm just reading into it and it was purely random chance, but I still find the irony of it all to be hilarious.

I feel like I've got my own palm-sized '57 Plymouth Fury (catch the reference on that one?).

Love and Rockets is great.

I completely understand. My ipod actually gives me relationship advice from time to time.

"Breaking up is hard to do"

"What's love got to do with it"

I think he wants me to be a womanizing man whore.