Katie and I actually have some live entertainment to look forward to in the coming months and I am so stoked about both.

First, for our fourth anniversary in October, we will be going to see the far-off-Broadway Chicago tour of Wicked.  This is the story of the witches of Oz before Dorothy comes into the picture.  My mom has seen it and loved it and Katie's mom loved it as well.  I've been wanting to see it and have had the opportunity in the past, but scheduling wouldn't allow for both of us to see it together, until now.  So we're going as part of our anniversary gift to each other. 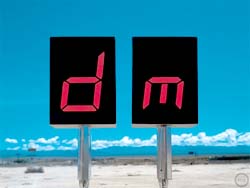 And, if you've been reading Blogography for any amount of time, you know Dave's a big Depeche Mode fan.  When the band announced their tour to support the upcoming new album, he was stoked.  Until he realized that the show nearest where he lives is scheduled to happen when he's away on business.  On that post, I commented saying that he should come to Chicago when they are in town.

Little did I know that, when DM is scheduled to be in Chicago at the end of November, he was going to be in Milwaukee on business.  Ideal, no?  He preordered the new album from iTunes, which included a special code to allow purchasers the opportunity to preorder tickets for the DM tour.  He did.  And now he, Katie, and I will be rocking out to the Mode on November 29.

Hey Kazza, you've met Dave before.  What's the best way to deal with a Dave that's gonna be so hopped up on adrenaline that he would likely be illegal in 48 states and several foreign countries?

Posted in Entertainment, Me & Mine | Permalink | Comments (5)

Sep 20
To quote the late, great Fred Gwynne in Pet Sematary, "sometimes, dead is better." That's the prevailing sentiment around the office today. Just when one of us thinks they are starting to get ahead on projects, we make the damn-fool...
Next Post

You best believe it that I got to get away...

Sep 22
From time to time, you run in to those days that you really want to go to work. Sometimes it's because of some great new project you are looking forward to working on or because of some recognition you are...

Awwww. My two favorite blogbuddies are going to meet in the flesh! I can't wait to read all about it! Make sure Katie takes pictures, and put 'em on Flickr.

When you're singing along to "Personal Jesus" are you going to be thinking about Steve Jobs? Or have you not completely turned to the darkside?

Have fun at the show and concert!

SJ, I've been using that name for some time now. When I thought of it, it was one of those lightbulb moments. I liked it a lot and still do.

Johnny, when I first read your post, I thought you were razzing me because I misread it to be Bill Gates. Now Steve Jobs could really be my personal jesus. But I think I'd prefer to praise the nameless and thankless programmers, designers and engineers that actually do the work. He's the figurehead, true. But, credit where credit's due.

A strong, forceful, open-handed slap across the face works quite well on Dave.

At least it has in the past.

And with thousands of screaming fans in the arena, it's not like anybody will care... because in the audience, nobody can hear you scream!

Er, the time I met Dave he was being beautifully behaved for dinner... :) Never actually got to see him hyped up so not sure that I's be able to offer any advice .. :) But don't worry, he's about the sweetest person you're ever likely to meet :)