I love music.  All kinds of music.  Everything is fair game for my lovin'.

So it really takes a lot for me to completely and utterly hate something that is music related. 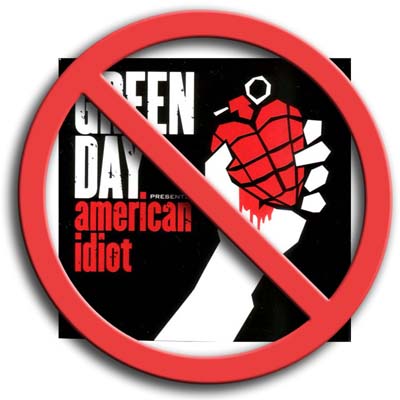 But, for the last six months or so since the release of this album, I can honestly say that I now hate Green Day and their horrifically overplayed album American Idiot.

Some songs are overplayed.  This is a fact that is hard to control in this day and age of studio pimping and station coddling.  A studio marketing person or a band's PR rep comes along and says, "Hey! We've got a great album for ya, please play it.  Here's some free shit as thanks!"  Sometimes it catches on.  But usually it's only for one or two songs worth on the album.  Those one or two songs receive A-list status from station program directors and it's Earworm City for the rest of us unlucky bastards.  The songs go into rotation and only a sledgehammer or a sympathetic deejay can do anything about it.

It is rare, though, for practically an entire album to make it on radio rotation lists at the same time. And this is the case we have here.  "American Idiot," "Wake Me Up When September Ends," "Holiday," "Jesus of Suburbia," and "Boulevard of Broken Dreams."  Oh that damn Boulevard song.  God, I cannot stand it.  That song seemingly received A-list designation from nearly every friggin' radio station in Chicago.  Metal, alternative, rock, pop rock, top 40, you name it, they played it.

I can't remember the last time I hated an album this much.  No... wait... I can.  It was that God-awful, earworming, sanctimonious piece of tripe known as Whitney Houston's Bodyguard soundtrack.  The very thought sends shivers down my spine.

It's not as though I'm anti-Green Day or am against the message that this album delivers.  Some of it is intended as a rally cry against George Bush.  Heck, that fact alone made me buy the album initially.  That, and I actually once liked the song "American Idiot."  Yes, I actually bought this album the first week it came out.  I wound up selling it a few weeks later, though.  I'm not pro-Bush in any sense whatsoever.  You all know that.  Or, at least, I would hope you know it by now.

But this does not excuse Green Day from making one of the most overplayed and, upon constant listening and reappraisal, overrated albums of the last year.

And it just keeps popping up in more and more places.  Muzak now plays it.  How sad is that?  Last night, Katie and I went to Applebee's for dinner.  I was in the middle of telling Katie what a great night it was when "Boulevard" came on the Applebee's Radio Network.  We both looked up in the air (one of those things you do when you realize the music is all around you and you can't really peg down one place from which it emanates), looked back at each other, and shook our heads in disdain.  Yeah, we both hate Green Day now.

It's just not good, people.  Give up on this album already.  Let it die.  Stop requesting songs from it.  Switch the station when one of the songs is played.  That'll learn 'em.

To cop a portion of one of Green Day's own song titles... Good Riddance.

for me i don't care either way, i never listen to FM radio anymore. i did the other day and caught seether, pretty good song they have on the radio, but it's probably been out for months and that was the first time i had heard it. the band that did it for me as far as overplayed was creed. i swore my sophmore year of college if they played "with arms wide open" one more time i was going to rip down the radio stations antenna, which was a mere mile down the road. when you combine the song on the radio with the constant play of that video, in which scott stapp thinks he's jesus, it is enough for even you to rip your remaining hair out. to this day creed is like nails on a chalkboard, and it's too bad because they were pretty good.

I totally agree with the fact that Green Day's new album is completely over played, but I'm going to have to disagree with you that it's not a good album.

As a whole it's one of their best albums ever. It's their best work since "Insomniac" which only two songs were got radio play from that one.

5 singles off one album isn't playing the whole album. It is close to half, but they have alot of other great songs as well.

Now if I never heard Creed or any other garage band that is ripping off Pearl Jam ever again I would rejoice.

Yeah, it's kinda funny because my friend Jason was reading that post and, when we went to the Bears game, he said that it didn't really sound like I disliked the album so much as I was just sick of hearing it. Even though I may have called it overrated, I think I would agree with him. It is a good album, overall. Much better than most of their previous work. But, being so sick of hearing something or seeing someone (actors/actresses) always impacts my overall perception of something.

Is this album good? Sure, I'll agree to that, relatively speaking. But is it good enough that it deserves this radio oversaturation? No. I think maybe that's why I called it overrated. Gimme five years and maybe I'll want to give it another listen.

No, five songs does not constitute an entire album. But that's five songs out of, what, eight that are on the whole album? Give it time and I think you'll wind up hearing the rest of them. They've already played a deuce of songs I never thought would see the light of day from that album.

I love following links in new posts to old material, it can be so fun!

I'm with you. I've been a big Green Day apolgist for the longest time. When I did college radio and I was around a ton of Green Day "they are sellouts" haters, I still backed them up despite my better judgement. One of my all-time favorite albums is Warning, a great album that didn't get much attention and thankfully didn't get overplayed.

But American Idiot I can't stand. I like the fact that it is political and all, but the songs just were not that good. I was so sick of Boulevard of Broken Dreams I wanted to stab myself in the eye everytime I heard it. Luckily the hype has died down.

I nearly vomitted when I was watching My Super Sweet 16 on MTV (I nearly vomit everytime I watch that show) and one of the rich bitches said that Green Day was her favorite band and wanted to get them to come play her party. Maybe that is a sign that American Idiot isn't quite political enough.

I, too, was a big Green Day fan in the earlier days. Good stuff. And I even picked up American Idiot when it first came out because I loved the title track. Then it was everywhere. Blech. Everybody loves it now, even now. Shoot me. And, you're right, it clearly isn't obvious enough in its political lean. If you were to ask any of these kiddie fans what Green Day's politics are all about, none of them would be able to answer correctly. They just don't "get it."

i completly disagree you with you, just cause they are the only band who have the guts to tell people how shit bush is doesn't make them shit...your opinion on the other hand is shit...if it is such a bad album like you said how come it has won over 6 awards and is still being put into nominations today 2 years after it's release...and the only reason it is over played is because people like it otherwise radio station wouldn't bother cause they would loose listeners. So before you start shouting off your mouth research first.

I really don't give a crap what you think. I know people like(d) it. But even now, more and more people tell me they agree with what I said. I never tried to imply that everyone hates it. I said I hate it and I'm sick of it and I think it's bad and overrated.

So, before you start shouting off your mouth, read first.

Well, one out of two ain't bad.

Learn to spell and maybe I'll take you seriously.

GREENDAY IS PROBOBLLY ONE OF THE BEST BANDS EVERRRR!!!!!!

AND JUST BECAUSE 5 OF THEIR SONGS ON THIS ONE ALBUM ARE MADE VIDEO, DOESN'T MAKE THEM OVERRRRRRPLAYEDDDDDDDD!!!!!!!!
SO SHUT YOUR FACE AND START LISTENING TO SOME DECENT MUSIC FOR ONCE YOU UNGRATEFULL LITTLE BUGGER!!!!!!!!!!

Is there a new fad regarding typing in all caps these days? Did I miss something?

Funny thing is, I can translate that. As good as possible considering you even managed typos in Spanish.

Yea, for the person who wrote about how he hates Green Day so much,I just want to say ass whole, Fuck you!!!! Green Day is the best fucking band in the world and American Idiot is one of their BEST Albums!!!! I never knew too much about Green Day until I heard American Idiot, so I bought their album, and thought it was the best fucking music I ever heard. So then I desided to colect all of their albums, and I did, and their older songs are great too. So Green Day is the BEST!!!

You are truely a super idiot...Note that you do not understand of good music..You do not have another thing to do that criticize the good groups of music?..In that CD they say the truth of the American society, and if you don´t like, listening other things that surely be a boredom compared with Green Day..the truth hurt...
I hate the people like you...I swear to you that as you return to say something that them I send you to hell...oK??You are warned..at the moment you are the person who I hate more..you know it..FUCK YOU!

So eloquent. All of you. Really.